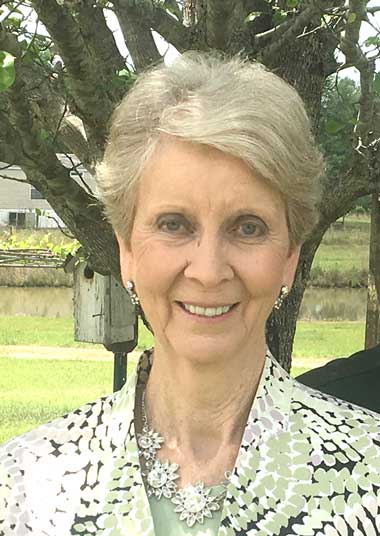 Mollie Earline Barnett went home to be with our Lord and Savior Jesus Christ on Wednesday, April 8, 2020.
She was born on the family homestead located in Bethlehem in Holmes County, Florida, on December 6, 1941, to the late Cyrus and Molly Mitchell. She left home after graduating from Bethlehem High School in 1959 and moved to Panama City where she met the love of her life, Wallace Barnett, to whom she was married for 56 years. Earline loved her family and community, but her greatest love was for the Lord. She attended Carmel Assembly from birth to the time of her death and never once wavered in her faith. Earline was a prayer warrior and a friend to all. She lived her life with grace and elegance and leaves behind a legacy of faith, kindness and generosity.
Earline was the youngest surviving of her seven siblings, Lucille Moore, Elouise Lee, Louise Davis, J.C. (Bill) Mitchell, C.W. (Dub) Mitchell, Theodus (Jack) Mitchell and Harvey Mitchell.
She was also preceded in death by her granddaughter, Lindsey Nicole Middlebrooks Lacayo.
Earline is survived by her husband, Wallace Barnett, two daughters, Kimberly Carter and Cindy Williams (husband, Clay Williams), grandsons J.T. Rousseau (wife, Faith Rousseau), Jack Williams and Blake Williams, two great-grandsons Kiran Lacayo and Kain Bush, and a host of loved nieces, nephews and cousins.
A private family service will be conducted at Carmel Assembly of God with interment in the church cemetery. Bro. Jerry Moore and Bro. Tommy Moore officiating. James & Sikes Funeral Home Maddox Chapel directing.