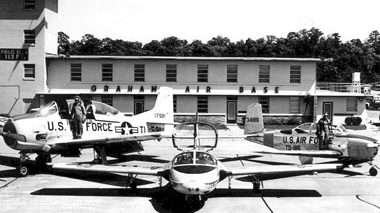 Wars tend to be won by those who produce the best weapons. Although the United States began at a disadvantage because it had not been planning for war as had Germany, it caught up, and eventually surpassed other countries, including Germany, in producing superior aircraft. We produced the most outstanding fighter plane, the P-51 Mustang, which was used as an escort plane for bombers flying over Germany. My uncle, Ray Cook, was a bombardier on one of those, the B-17, when it was shot down, causing Ray to spend the remainder of the war in a German POW camp. Even the Atom Bomb, the ultimate weapon, had to be delivered by an airplane. Every type of plane had to be operated by a pilot, and pilots had to be trained. That is where Marianna came into play. The best airplanes combined with the best trained pilots is credited with winning WWll for the United States and its allies.
At the beginning of WWll, Marianna already had a municipal airport with a usable runway, and a climate where training could be conducted regardless of the season. Jim Hart remembers exactly where it all began, because he lived there. His father managed a farm of 1200 acres that was owned by Robert Allen Willis, a Greenwood banker. That property was added to the Marianna Municipal Airport acreage, where the government located an Army Air base in 1942.
His family were to remain there until all their crops were harvested, and as a child, Jim watched many government buildings being constructed, including the chapel, which was built adjacent to his family’s home. In addition to row crops and cattle, the farm boasted 150 acres of pecan trees, many of which are still there.
Jim did not then know that someday he would learn to fly in the same place where he once played with toy planes, but watching pilots learning to fly inspired him to want to someday fly the real thing. After the war, the base continued to train pilots, but was renamed Graham Air Base, and placed under civilian control. Jim entered the Air Force as an aviation cadet, and while doing pre- flight training at Lackland AFB in Texas, he joined the Aviation Club, where he was introduced to the Colonel in charge of the program. When he told the Colonel he was from Marianna, Florida, the Colonel’s face lit up, and he said that was where he had learned to fly. He asked Jim if he would like to continue his training in Marianna, and when Jim happily said yes, the Colonel made it possible for Jim to train at Graham. He trained on the T-34, called the Mentor, a primary training plane, which provided tremendous capability with high reliability at low operating cost. Manufactured by the Beech Aircraft Factory, it was in continuous use for 57 years. The U.S. Navy, Marines and NASA still operate the Turbine version, (the T-34c) for training, range clearing and as chase planes, etc. Future aviation history books may well name the T-34 Mentor as one of the greatest aircraft designs of all time, along with the A-36, its “brother,” the Bonanza, also a propeller driven plane with a conventional tail. To transition to flying jets, Jim trained on an T-37, which was also used as a primary pilot training vehicle for over 52 years after its first flight. It flew for decades for the United States, and in the air forces of several South American countries. The US. retired its last T-37 in 2009.
My sister, Marilyn’s, husband, Joe Blandford, also went through pilot training with Jim at Graham Air Base, and speaks highly of him. Joe told me that Jim had also married a Jackson County girl, Patricia, (Patty), Landrum, and that in his civilian life, joined the Air Force Reserve program, eventually rising to the position of General before he retired. Joe is also an excellent pilot, and at age 80, is still flying his own plane. After his stint in the Air Force, Joe was working in Dayton, Ohio but had business with a military contractor in California, where Dan and I were living at the time. Joe had joined the Aero Club, which had several T-34s available for its members to use, so he decided to fly it to California and asked us to meet him at an airport in Van Nuys. From Ohio to California is a long trip that included flying over mountains in an old plane with no oxygen on board. We overheard one member of the ground crew ask another guy, “Who are we waiting for?”
“Oh,” he answered, “Just some crazy guy from Ohio who is flying here in an old T-34.”