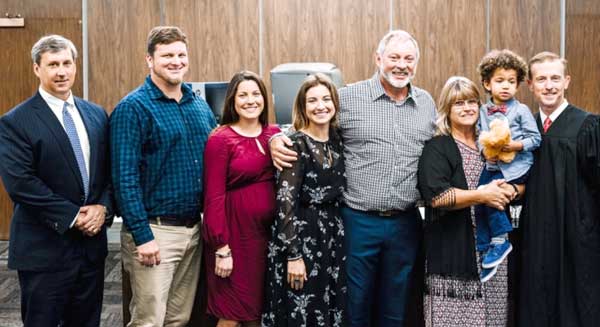 Once Thanksgiving dinner is over and done with, children turn their heads and eyes to Christmas and the Christmas season. Many start before then but, most assuredly, everyone is focused on the festive season come the Friday after the big turkey day.
This year, Jeremiah “JJ” Howell Toole, has more blessings than he could have ever possibly imagined. Without exception, we all know of children who have one parent. Many others live with both parents. Unfortunately, a variety of circumstances can result in a child or children being left without a parent or parents. These situations are those where adoption and foster care can be so vitally important.
Each year, an ever-increasing number of children is placed in foster care; some of these are adopted but there are many others who are not as fortunate and remain in foster care. Adoption is not an easy nor a quick process. To quote a Mastercard commercial, the end result is priceless. That terminology applies to the case with JJ this past Christmas Eve.
You see the Tooles are like many others, who see fostering is the thing to do but just maybe not our family because of all the what ifs. However, that was not the case with JJ and the Tooles. You see the Tooles currently own rental property and Melody had become a mentor to a tenant who just so happened to have been friends with JJ’s biological mom. When his biological mom was unable to keep JJ due to unforeseen circumstances, JJ’s biological mom listed Steve and Melody Toole as Godparents after she met the Tooles and learned that they were helping with the care of her son. The Tooles had raised two girls of their own with one already married and the other a college graduate and working, but they had no hesitation in asking to go through the foster certification process. Jackson County proved to be a small world when JJ’s case was at its beginning. The CPI, foster care representative, that called the Tooles to come to the office, had also rented from the Toole’s years earlier. This previous association paved the way for the foster care process to begin for the Tooles. On August 22, 2017, Steve and Melody received the phone call that would change their lives forever. JJ was placed in their home and has remained in their care. On December 24, 2019 Jeremiah Howell Toole was welcomed into their home and lives forever.
That morning, that JJ was officially able to add his new last name as he became Jeremiah Howell Toole. His sisters, Lindsey Toole and Kaylee Toole Bruner, could not have been more excited to gain a baby brother. But the news gets better. JJ won’t be the only boy in the family for long. Kaylee Bruner and her husband, Charles are expecting their first child, a son, in March 2020. As a big sister and an expectant mother, Kaylee could not have been happier. In a post about the adoption, Kaylee said, “Today is a very special day! We’ve prayed and waited for this day for almost two and a half years! 854 days ago, JJ was placed into my parents’ home and we all instantly fell in love. Today JJ is finally adopted! I got a little brother for Christmas. It truly is a Christmas miracle.”
Melody Toole summed up the event, “It happened Christmas Eve and we received the best Christmas gift ever. Steve got the “son” he always wanted and I got the “boy” I never had. Sisters got the “baby brothers” they always wished for. It definitely was the spirit of Christmas.”
JJ will have lots of hands-on instruction coming his way as Lindsey and Kaylee have spent years enjoying the outdoors and know all the ropes to hunting, fishing, water skiing, snow skiing, all things “boy.”
Melody and Steve have chosen to remain active foster parents and would consider the possibility of another adoption if it is presented. Melody said that fostering is not easy, but it is very rewarding to see the smiles on the kids faces, and the happiness that has replaced the sadness and the pure love that comes from an innocent child. She said, “It is hard to say goodbyes but there is a peace in knowing that I provided just what the child needed and at just the right time. There is comfort in seeing the biological parents reunited with their children and knowing that they are ready for the task of raising their child after leaving our home.” For now, just days after JJ became officially a member of their family, the Tooles reflect back over the 854 days and see where God had a plan from the very beginning, “We are so thankful that we were obedient and followed our hearts and are elated knowing that JJ will be part of our family bringing joy to our lives for many, many years to come.”