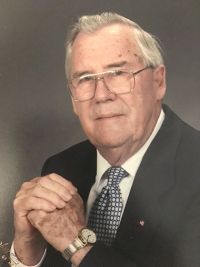 Walter Wiggins, 88, of Marianna, Florida, passed away Thursday evening, April 4, 2019. Walter was born on December 11, 1930 in Tarboro, NC. He was the third child of eight born to Charles Ambrose and Lannie Kent Wiggins. He moved to Marianna and graduated from Marianna High School in 1949 where he participated in football, baseball and was President of the TAC club. Upon gradation, Walter served in the US Army during the Korean War where he was stationed in Germany. After leaving Germany, he returned to Tarboro where he met and married the love of his life, Rebecca Wooten. After their honeymoon, the couple moved to Marianna where Walter purchased what was to become Quality Hardware. The couple soon had two sons, Stuart and Bryan.

Walter served Marianna and the surrounding communities through many organizations. He was a life time member of First Baptist Church, where he served as a deacon and taught Fifth Grade Boys Sunday School for more than forty years. He awarded countless pocket knives to many of the youth that came through his class. He coached Dixie Youth Baseball for twelve years and Pee-Wee Football for six. He was president of the Marianna Optimist Club, which promoted the youth of Jackson County. His true passion was watching all his grandchildren participate in their numerous activities. It didn’t matter if it was a dance or music recital, band halftime show, soccer, baseball or football game, or a Pinewood Derby, Granddad was there.

Funeral services will be conducted at 3 p.m., Sunday, April 7, 2019 at Rivertown Community Church in Marianna with Mike Evans officiating. Burial will follow in Pinecrest Memorial Gardens with James & Sikes Funeral Home Maddox Chapel directing. The family will receive friends, Sunday, beginning at 1:30 p.m. until funeral time at the church.

Condolences may be made online at www.jamesandsikesfuneralhomes.com