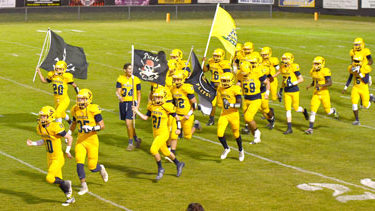 The Sneads Pirates knew when Jefferson County came to town, they had something to prove and prove it they did. They put up 14 points in the first quarter to set the tone for the 34-18 thrashing they gave the Jefferson County Tigers last Friday night. The win was two-fold in that it kept their record perfect on the season as well as got the Tiger monkey off their back. They fell in the regular season to the Tigers and it was that same team that ended their season in the post season. The crowd was as into the game as the players last Friday night.
After 14 first-quarter points, the Pirates added another seven in the second quarter with Jefferson County answering with six. At the half, Sneads had a 21-6 lead but wanted more.
They added 13 points in the third quarter while holding the Tigers off the board. In the fourth quarter, Jefferson County put up 12 points but the Pirates lead was never in question as they dominated the first three quarters of the game with points on the board, time of possession and fewest penalties.
Colton Mercer was under center and went one-for-three for seven yards. Seth Scott was the target with a seven-yard catch.
Calvin Stringer was once again the workhorse on the ground attack, scampering for 231 yards on 25 carries and found his home in the end zone three times on the night. Seth Scott was just shy of a 100-yard night with 95 yards on 10 carries and one touchdown. Colton Mercer proved to be a multi-skilled quarterback with 71 yards on the ground attack on 11 carries and a touchdown. Dylan Dawson had 33 yards on three caries while Ric Reed had two carries for seven yards.
Ric Reed added a 17-yard kickoff return to his mileage on the night while Alonzo Hill had a 10-yard kickoff return. Jatavious Townsend had a return for eight yards.
Anthony Moran had a banner night, connecting for four-of-five point after attempts.
Defensively, Alonzo Hill had an NFL night with seven solo tackles and four assists. Seth Scott had a great night with six solo tackles and five assists followed closely by Dylan Dawson with six solo and three assists on tackles. Ric Reed and Spencer Holden recorded three solo tackles each, while Townsend and Kyle Benton had two each with both adding one assist to their stats. Matthew Thompson, Taylor Brown and Jack O’Brian both had one tackled each with Brown picking up four assists, O’Brian adding two assists and Thompson adding one.
Dylan Dawson snagged two interceptions on the night.