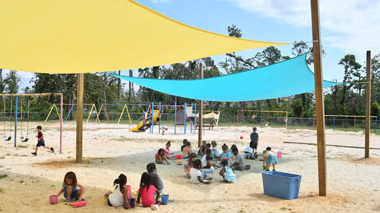 The students at Golson Elementary were smiling a little bigger Monday when they arrived at school and headed to recess. They had covered play areas to offset the 90-plus degree weather.
Anne Mathis, Resource Teacher at Golson Elementary couldn’t be happier, “I want to tell you that the Rotary club has really come thru for our kids here at Golson. Last spring, they contacted us about buying school supplies for the next school year. After the district released the info that supplies would be covered, Allen Harkins called back to say they still wanted to do something for us. During the storm we lost many trees on our east side playground. It was to the point that some days, due to the heat our kids could not go out and play. The decision was made then to provide sun sails for the playground. They have purchased and installed two 20 X 20 sails. This project started the middle of August when the posts were installed one Saturday, with us arriving this Monday and the sails were flying.”
Rotary President Allen Harkins was very proud of the local Marianna chapter for being able to give back to the community, “What happened with the school supplies was great but we were given some money from the Quincy Rotary Club. They gave some money to the community. Dr. Richard and Sarah Schulz’s grandson is a part of the Rotary Club there and they organized a fundraiser over there. They donated the money to Rotary for things for Hurricane Michael relief. So, we used that money to do this project and used our labor.”
Harkins said the school notified them the district had received through a grant application, school supplies for the district. He said we still wanted to do something for the school. Harkins said, “We talked with Golson and they said they could really use some shade with so many of their trees being taken out by Hurricane Michael. We started looking into different shade projects that we could use and possibly transfer to the new K-8 school in one year. We found these sails and with us providing the labor, they were within our budget, so we opted for them. We dug and placed the posts in the ground and because these are young kids, we wanted to make it as attractive as possible so we chose to spend a little extra money on the colored ones. I’m glad we did because the kids like them and it really adds beauty back to the campus. I went to school there and it was disheartening to see it barren with all the trees taken away by the hurricane.”
Harkins added that they are confident that the sails and possibly the posts and all can be transferred to the new K-8 school to use for years to come.
Quincy Rotarian George Brunner arranged for the Quincy Rotary Club to give back to the community where his ties were. His grandparents (Dr. Richard and Sarah Schulz) made their home here and raised their children in the Jackson County School system. Once again, Jackson County children and grandchildren remember their roots.
The Rotarians providing the manual labor were Byron Ward, Lee Dunaway, Allen Harkins, C. James Platt, Ken Renegar, Randy Smith, Tom Stadsklev and Mike VanHuss.
The Marianna Rotary Chapter continues to give back to the community in various projects anytime they see a need. They give scholarships yearly to Chipola College through the Foundation with this year’s total of $7,747.75, it brings their total to $234,108 in scholarship donations since the club was chartered in 1929.