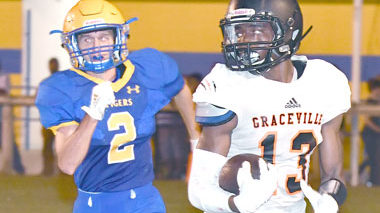 Graceville had something to prove going into Friday night’s game against Holmes County before a crowded home stand. They were 2-0 and wanted to prove they were the real deal and leave the field with a 3-0 record. They didn’t disappoint, shutting out the Blue Devils 32-0. This comes after a 6-0 shutout of Chipley and a 16-8 win over Bay High. The Tiger defense is definitely clicking on all eight cylinders, allowing just eight points through three games that came off of a touchdown and an extra point.
This past Friday night, the Tigers wasted no time in letting the Blue Devils know they were a force to be reckoned with. Five touchdowns with two of those through the air from Tanner Spooner.
Tanner Spooner was five-for-five passing for 81 yards, two touchdowns with his favorite target with four receptions and one touchdown being Quavo Sorey. Quavo Sorey had four receptions for a total of 61 yards. Zachary Zuraff recorded on touchdown through the air from Spooner.
Jeremiah Castro found the endzone twice, rushing for a total of 179 rushing yards on 13 carries.
Xavian Sorey had one rushing touchdown on the night.
Graceville is ready for Friday night when they host the Bozeman Bucks who come into the contest with a 3-1 record. Their only loss was to Holmes County where they fell 12-6. They bounced back with a 21-14 over Wewahitchka and a 21-20 win over Chipley. In comparison, Graceville shutout Chipley 6-0 and Holmes County 32-0.
Fans are encouraged to attend this Friday night’s game and cheer their Tigers on to victory number four. Kickoff is scheduled for 7:00 p.m.