Owens Merrill Collins, 88 of Greenwood, Florida, passed away Monday, January 6, 2020 at Flowers Hospital. He was born in Goodwater, Alabama on March 26, 1931 to Rossie Hubert and Kitty Stewart Collins. Owen served in the United States Air Force for eight years, a member of the Masonic Order of Chipley, Florida and a member of Lovedale Baptist Church.
He was preceded in death by his parents, Rose Hubert Collins and Kitty Gertrude Stewart Collins; son, Rodney Merrill Collins; seven brothers and six sisters.
Owen is survived by his wife, Donna Rumbley Collins; two sons, Reverend James Wallace Collins, of Lakeland, FL, Michael Hines, of Two Egg, FL; daughter, Marsha Lynn Gerrard, of Jacksonville, FL; two grandsons, James Collins, William Gerrard; and sister, Gayle Spirakis, of Jacksonville, FL, and numerous nieces and nephews.
Funeral services will be 10:00 AM, Thursday, January 9, 2020 at Lovedale Baptist Church with Reverend Steve Canada officiating. Interment will follow in Lovedale Baptist Church Cemetery with James & Sikes Funeral Home directing.
The family will receive friends one our prior to the service at Lovedale Baptist Church.
Expressions of Sympathy may be made online at www.jamesandsikesfuneralhomes.com 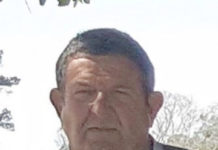