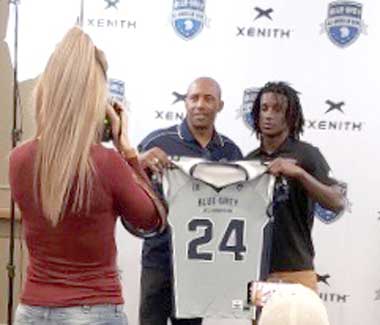 Football fans in Jackson County and most assuredly those faithful Bulldog fans were tuned in to their televisions and computers Saturday at 1:30 to watch Marianna High’s Damone Rolle. Rolle was chosen to participate in the Blue-Gray All-American Bowl this past weekend at the Tampa Bay Buccaneers’ Raymond James Stadium.
Rolle is and has always been known as a young man of few words but the excitement was there when he was selected to play in the Blue-Grey Bowl Game. He wasted little time in showing his fans and all those tuned in to watch their standout. Rolle scored the first touchdown for his team on the ground. Rolle rushed for a total of 728 yards on 61 carries his senior season. Defensively, Rolle had one solo tackle and two assists and recorded one fumble.
About his experience at the Blue-Grey All-American Bowl, Rolle said, “It felt great.” Folks, that’s about as good as it gets from the man of few words. Rolle did say he was still in the hunt for a place to hang his cleats next season. He has been offered from LaGrange College but has gotten he attention of Manchester and Southeastern. He expects to make his decision shortly. Rolle also said he’d like to thank coach Donaldson (John) for all of his help and encouragement while he’s been a member of the Bulldog football team.
Congratulations to Damone Rolle on being selected to participate in the Blue-Grey All-American Bowl as well as his performance during the game from the publisher and staff of the Jackson County Times.