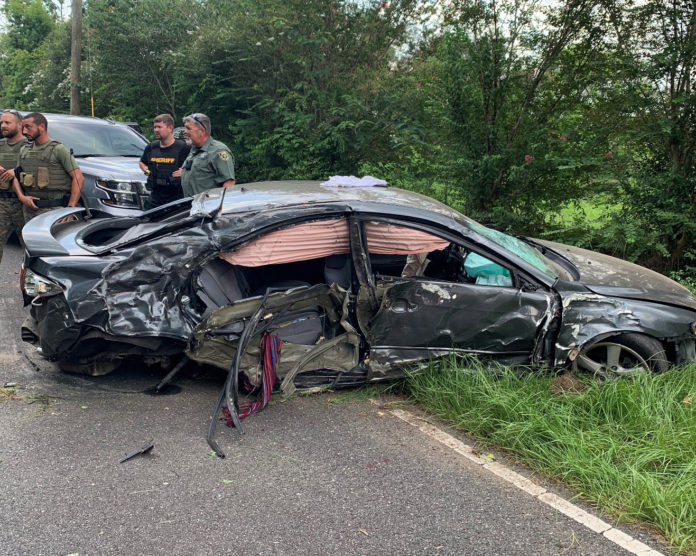 On Wednesday, August 5, 2020 members of the Jackson County Sheriff’s Office were working an active Burglary of an Occupied Dwelling case in the area of the Dogwood Heights Community with the assistance of ACI and JCI K-9 tracking teams and the Florida Highway Patrol.

While patrolling the perimeter of the scene near Watson Street, Investigators observed a male subject that possibly fit the physical and clothing description given by witnesses to the burglary. Investigators observed the subject leave a residence on Watson Street in a car. While observing the vehicle in attempts to further identify the subject, the driver, later identified as Domingo Morales Hamilton Fernando, rapidly and recklessly accelerated in attempts to evade the Investigators. Fernando did with willful and wanton disregard for the safety of the motoring public run through multiple stop signs at major intersections in the area of Hwy 71 near CVS, and travel at speeds well in excess of the maximum posted speed limit on Hwy 90 towards the Chipola River bridge. Fernando turned the vehicle at a high rate of speed onto Old US Road next to Auto-Zone where Investigators attempted to initiate a traffic stop. Fernando disregarded all signals to stop and rapidly accelerate to speeds that well exceeded the posted speed limit towards marked units working the burglary scene. Without slowing or regards for the safety of the Law Enforcement Officers at the scene, Fernando continued past them at the excessive rate of speed. Shortly after passing through the intersection of Dogwood Drive and Old Greenwood Road, Fernando lost control of the vehicle as it went off of the right shoulder of the road, struck a series of trees, spun around, flipped over and landed upright on the left shoulder of the road. Fernando exited the vehicle through the front passenger side window, a 17-year-old female exited through the rear passenger side door. Upon taking the driver into custody, a 2-year-old female was located standing up in the back seat. While removing the 2-year-old from the car, a 3-year-old male emerged from the woods that had unknowingly been ejected from the vehicle. Fernando not only showed disregard for the safety of the public and public servants, but also for that of his own family.

The presence of the children in the vehicle was not known to Investigators until the vehicle wrecked. Sheriff Roberts would like to make it known on behalf of the pursuing Investigator that if it were known that children were present in the car prior to the pursuit, he would not have given chase. Miraculously, the children were unharmed as a result of the incident, but were taken to Southeast Alabama Medical Center as a precaution.

The driver, Fernando, did sustain trauma to the head and facial area as a result of the crash and was Life-Flighted to Southeast Alabama Medical Center as well where he is in critical condition.

Subsequently, Fernando was identified through the Department of Homeland Security’s Immigration and Customs Enforcement to be in the United States illegally and currently has an outstanding Final Order for Removal from the United States. Fernando was currently avoiding apprehension on this order. Agents referred to Fernando as a “bad dude”, indicating that he is suspected of being involved in Human Trafficking and smuggling into the United States illegally.
A warrant has been issued for Fernando’s arrest upon his release from medical care.
Sheriff Roberts would like to extend his gratitude toward the Florida Highway Patrol, the ACI/JCI K9 Teams, and Jackson County Fire and Rescue units for their expedited response and professionalism displayed during this incident.

Sheriff Roberts and his staff are committed to providing safety to the public, and cherish the children of our community. Sheriff Roberts encourages all motorist to obey the traffic law set forth by statute and in the event, you do violate a traffic law and you are encountered by a Law Enforcement Officer please stop. All lives are precious, but an innocent child should not have to pay for the bad decisions of a capable adult. Sheriff Roberts encourages anyone with any information about any illegal activity to contact the Jackson County Sheriff’s Office at 850-482-9624 or Chipola Crime Stoppers at 850-526-5000 or toll free at 888-804-8494. Tips can also be submitted online at www.crimestoppersofjacksoncountyfl.com