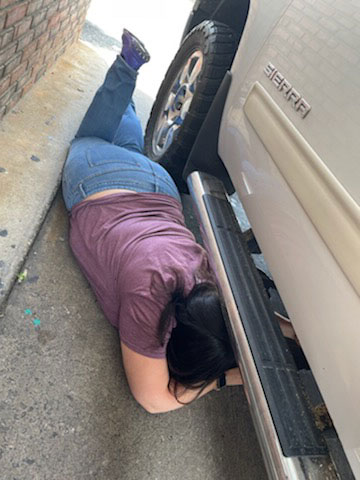 Tuesday appeared to be a normal day for employees at Paramore’s Pharmacy and Gifts for all intents and purposes. Prescriptions were being brought in, called in, filled, shoppers were being taken care of and nothing appeared out of the ordinary. Fast forward just a little. Traffic in the drive-thru appeared to be backing up at about the same time that a distressed lady called out that her vehicle would not move. What would a pharmacy and gift shop know about what appeared to be a mechanical issue with a vehicle?
Pharmacist Christina Proctor admittedly says she knows absolutely nothing about car repairs although she is married to an auto mechanic instructor. She put the wheels in motion, called him and told him what the lady had said, “She said her car won’t move, it won’t go into gear.” She said without hesitation he said, “It’s a (??) truck isn’t it?” The TIMES left off the make of the truck intentionally. Proctor immediately said, “Yes, how did you know that?” She said he told her that particular make of truck had had issues with gears locking up and that he could talk her through what to do. Proctor and pharmacy tech Aundrea Johnson headed outside to assist the lady in distress. Proctor says she was quite surprised that he immediately knew what type of truck it was and that he could talk her through to get it going. She said, “He said you can fix it and I was like I can fix it? He said, yes, probably what’s happened is that there’s a line that goes from the steering column to the transmission that is notorious for popping out. I am crawling under this vehicle, and I know absolutely nothing about vehicles. I am the one who will definitely just put gas in the car and drive it. So, I Face-timed him and he was explaining to me where to look over the phone and I couldn’t reach it. Aundrea says, ‘Well I’m a little smaller than you so let me get under there.” So, Aundrea actually crawled up under the car and with the help of my husband was able to latch it back together and got the lady on her way. All in a day’s work.”
Pharmacist and owner Lee Dunaway was more than pleased that his staff was so willing to help out in an area totally unrelated to pharmacy and gifts and to do so without a moment’s hesitation.