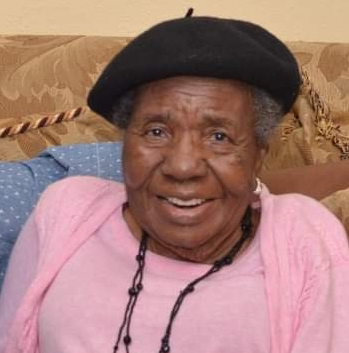 On the 4th Sunday of April 1927, which happened to be the 24th day of the month, a baby girl was born to Henry Louis and Ola Mae Coleman. They named this child Louise. She was born in Sumpter County, Georgia, on the Martin Family Farm in the Marietta Community of Andersonville. Just shy of two years after her arrival, the stork visited again with another girl named Rosa Lee.

The Colemans realized that Georgia at that time, was not a place their young family could prosper, so on the advice of his brother-in-law, Timothy Slappey, Louis decided that the family should relocate to South Florida. In the Spring of 1937, Ola Mae and her two young daughters boarded a train for West Palm Beach in search of a better life. Louis joined his family later, after leaving under the cloak of darkness, as the they still owed a sharecropper’s fee.

Louise matriculated through the public schools of Palm Beach County and was a 1948 graduate of, “The Unsinkable”, Industrial High School. Shortly before graduation, in a bet with a friend, Mozelle Johnson, a young airman named Arnett James Pittman, met Louise and stole her from that same friend. They were married on June 21, 1948. Louise became the wife of an Air Force man and lived throughout the United States as a military wife. After 21 years of marriage, Louise was left a young widow due to the untimely death of her husband, just prior to the birth of their fifth child.

Two short years later, in September of 1971, at the urging of her sister-in-law, Masrine, Louise packed up her young family, left her immediate family in West Palm Beach, moved to her late husband’s hometown of Marianna, where she had absolutely no family of her own, in search of a better life for her children. She learned how to drive prior to coming to Marianna, “bought” a used Ford Fairlane 500 from her son, Joseph, who stayed behind in West Palm Beach, put a new trailer on heir property, inherited from her mother-in-law, and her young family thrived.

On May 1, 1975, Louise trusted love the second time and married Albert Patton, Sr., her constant companion for the next twenty years. Louise became a widow for the second time on December 26, 1995.

Mama Lou, as she was affectionally called, was a cook by trade and retired from the Holiday Inn Corporation after 16 years of dedicated service. Later in life, she ran an in home daycare where she nurtured and raised countless children in the community.
Louise was a longtime devoted and faithful member of the Mt. Ararat AME Church where she served as an ordained deaconess, the adult Sunday school teacher, steward, missionary and stewardess.

In her golden years, she ALWAYS kept a bag packed. Honestly. She was ready, set, go. And she might be gone for six months. She would say, “ I ain’t got no babies at home. They all can take care of themselves.” Momma packed a lot in her 95 years. She lived well, loved much, and savored it all. She did all she wanted to do and left no stone unturned. After not having a large Thanksgiving gathering for the last two years, we decided as a family to have one this year and Marianna was overwhelmingly chosen as the location. We had close to fifty family members and friends at Momma’s house, including all her children. We had a grand time. We’re so thankful everyone came. On the evening of December 8, 2022, in the comfort of her home, Louise Coleman Pittman Patton left on her own terms. We will certainly miss her and look forward to a great reunion. To God Be The Glory!!

In addition to her husbands, Louise was preceded in death by her parents, stepson, Albert Patton, Jr., and her only sibling, Rosa Lee Miller. A virtuous woman, who never met a stranger, she was loved by all whom she encountered.

Mrs. Patton will be lie in repose at St. James AME Church, Marianna, FL, Saturday, December 17, 2022 from 10 AM until funeral service time of 12 noon.

Burial will follow in the Orange Hill Cemetery in Marianna, FL under the directions of Christian Memorial Chapel of Graceville, Florida.