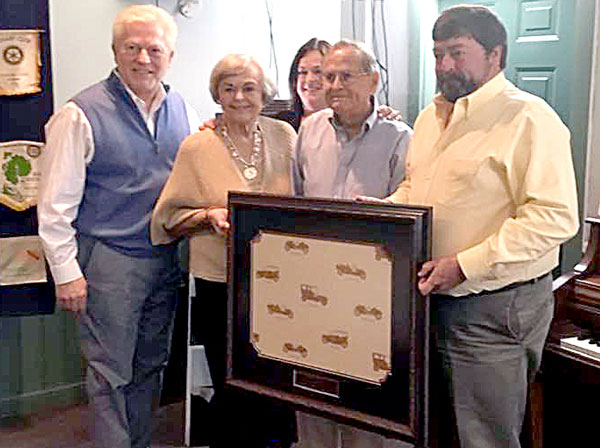 Ricky Miller of Miller & Miller was the guest speaker at Rotary last week. He had a plateful of information for those present and all of it was great news for Jackson County. As with several in Jackson County, the Miller & Miller Chevrolet, Buick, GMC Cadillac dealership was hit hard by Hurricane Michael.
Miller told those present last week, “We have great news. We hired Enco Construction and we are ready to start re-building our state of the art GM facility on the west end of Marianna. I love the west end, I grew up on the west end, fell in love with my wife who I met at TG&Y on the west end, and most of my life I’ve worked on the west end of Marianna. It brings our family great pride to rebuild on the west end.” Miller went on to say his first thanks went to his Lord and Savior for being by our side during this process. He added that he would also like to thank their valued customers and wonderful employees for their patience. Miller said, “The last year has been a challenge that, without God, family and this wonderful community, we wouldn’t have made it and we thank you.”
Miller had yet another surprise for everyone there, especially one special family. Harrison is a name synonymous with Jackson County, baseball, hot dogs, apple pie and Chevrolet. After all, it was Creshull Harrison, Sr. who brought the Chevrolet dealership to Marianna in 1928. And we have all been caught singing baseball, apple pie and Chevrolet in our heads following the weekly Sunday night commercial during Bonanza.
Miller and his family honored the Harrison family with an extra special surprise. Miller asked the Harrisons to come to the speakers table. Once there, he presented him with a framed portion of the very wallpaper that donned his office when it was built on the west end of Marianna. Miller went a step further. Because of the impact Harrison Chevrolet, now Miller & Miller has on the Jackson County community, another framed piece was given to City Manager Jim Dean to display at city hall.
In an interview with Ricky Miller, he said, “The Harrisons were Chevrolet for many, many years and I learned so much from him both on a business and personal level. He knew how to treat people, how to make family out of his business relationships. I hope I can always remember all the lessons I learned from him.”