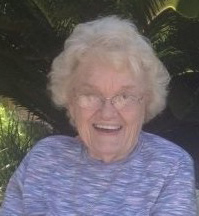 Revells, June Marie Watson, born in Florida on June 24, 1926 and passed away peacefully on January 6, 2021 with her loving children at her side.

June graduated from Leon High School in Tallahassee, Florida. She attended and graduated from Holmes Bible College in Greenville, South Carolina with a bachelor’s degree in biblical studies.

On November 5, 1939 at the age of 13, June accepted the Lord as her Savior and while walking from church she promised “Lord, I am going to serve you even if I have to leave home and live on crackers and butter”!

Over the years, June and Ed held many positions in churches in both Chattahoochee, Florida and Fairbanks, Alaska where they moved to on May 5, 1956. While living in Fairbanks, they supported the Pentecostal Holiness Church and cared for many Alaska Natives and others suffering from misfortune, No one ever heard June or Ed say anything negative about anyone or an issue, “There is always hope in Jesus.” Their passion was whatever God put before them they would care for lovingly.

June Watson Revells will be missed by everyone who knew her.

Funeral services will be held at 3:00 p.m. on Friday, January 8, 2021 in the McAlpin Funeral Home with Reverend Johnny Ray Fontenot officiating. Burial will follow in the Mt. Pleasant Cemetery, 4.5 miles East of Chattahoochee, Florida, off the Blue Star Highway.

Laura McAlpin with McAlpin Funeral Home is assisting the family with the arrangements.