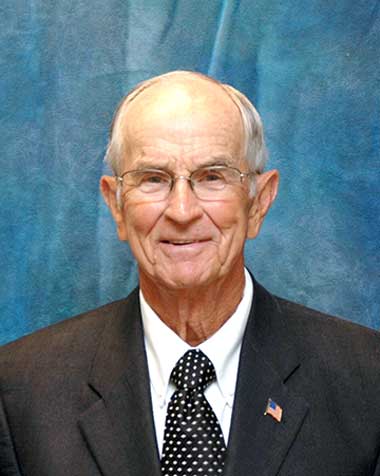 John Padgett, 89, of Marianna, FL died Friday, March 27, 2020 at his residence.
John was born on September 6, 1930 to the late Elijah and Rhea Martin Padgett. He graduated from Marianna High School in 1948 and is a U.S. Army veteran, having served during the Korean Conflict as a Medic. John was also a Metropolitan Insurance Company agent, part owner of Webster’s TV, owned and operated O.K. Tire Store in Marianna, all before retiring as manager of Compass Lake in the Hills. He served one term as a Jackson County Commissioner, was a loyal member of American Legion Post 100 for 60 years, and was a volunteer and board member at Habitat for Humanity. John also served on Chipola College Board of Trustees from year 2000 to present. He was a faithful member of the First Baptist Church of Marianna and a member of the Fishermen’s Sunday School Class. John was very capable and dedicated to any challenge he accepted, whether civic, church, or the needs of others. He was happiest when working hard or fishing. John was loved and will be greatly missed by all who knew him.
He was preceded in death by his parents; wife, Betty J. Padgett; brother, Lloyd A. Padgett and wife, Myrtle; sister, Katie E. Padgett; brothers-in-laws, Dr. Arnold Lambe and George D. “Pete” Hilton.
John is survived by his sisters, Lola Lambe and Edie Hilton; children, Alan Padgett, Mike Padgett and wife, Toni, Lisa Douglas and husband, Maynard, Karen Russell and husband, Michael; grandchildren, Cole Padgett, Tara Meyer and husband, Nick, Adam Padgett and wife, Amara, Sheridan Padgett, Kristin Evans, Tanya McCormick and husband, Dan, Emily Russell and Amy Russell; six great grandchildren; special friend, Sue Dilmore; and many special nieces, nephews, cousins and friends.
Private funeral service will be conducted at James & Sikes Funeral Home Maddox Chapel. Interment will follow in Pinecrest Memorial Gardens with James & Sikes Funeral Home Maddox Chapel directing.
In lieu of flowers, memorial contributions may be made to Chipola College Foundation, 3094 Indian Circle, Marianna, FL, 32446 in memory of John.
Expressions of sympathy may be made online at www.jamesandsikesfuneralhomes.com