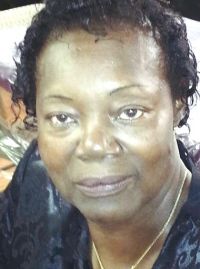 Mrs. Betty Pittman Jackson age 72, of Orlando, Florida and formerly of Campbellton, Florida went home to be with the Lord on Monday February 11, 2019 in Orlando at the Orlando Health Care Center.

She was a native of Jackson County, attended Saint Paul High School, a former member of the Saint Paul A. M. E. Church and the daughter of the late Robert and Queen Pittman of Campbellton, Florida. Betty was one of twelve children.

She enjoyed fishing, cooking, gardening and being in the company of family. She was a faithful member of True Vine Baptist Church where she served on the Usher Board as the President. She was employed at Regal Boat Company for 32 years and retired in 2011.

Funeral services were held at 11 AM, Saturday, February 23, 2019, in the M. Sue & Rodney D. Pittman Memorial Chapel in Graceville, Florida with the Reverend Curtis Pittman eulogist.

Mrs. Jackson was laid to rest in the Saint Paul/New Bethel Cemetery in Campbellton, Florida under the directions of Christian Memorial Chapel of Graceville.