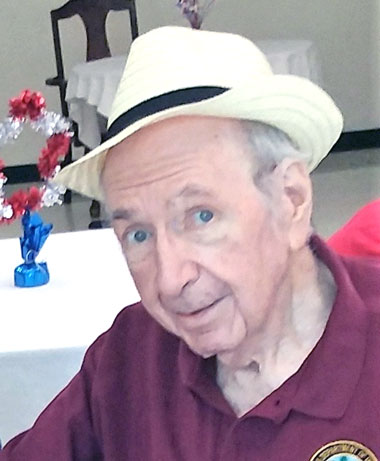 Arnett B. Peel, 85, passed away August 27, 2019 in Mobile, ALA. He was born in Malvern, ALA to the late Sam Peel and Blanche Peel Jones on March 26, 1934.
Arnett graduated from Marianna High School in 1952, then attended the University of Florida where he was a member of the KA’s and graduated with a degree in music. He lived for many years in Dallas, Texas where he owned and operated Mother Dubbers, an audio and video reproducing business! After retirement he returned to Mobile and spent his time playing with friends in bands that would entertain residents of retirement and nursing homes! Music was his passion and Gift from God that he enjoyed sharing with others all of his life!
For 15 years Arnett volunteered his musical talents as a singer, bass player and drummer to entertain at various nursing homes in the Mobile area with a band called “Memories for You”.
Arnett was always happy to entertain people which he did his entire life. He was a singer with a real flair for making the lyrics come alive. As a drummer he was alert to nuance and added his insight and touch to every song. He was extremely observant and was always kind and witty and gentle in his humor. He was a true gentleman with a wonderful ability to love and let people know he appreciate them-always a thoughtful, gracious man. He is greatly missed.
He is preceded in death by his wife, Doris Beck Peel of Mobile, ALA.
Arnett is survived by his sister’s, June Peel Gray, Mary Ann Peel Thomas, Lori Peel Peterson, nieces Pam Gray Nobles, Cindy Gray, Brianna Peterson, nephews, Evan Thomas, Elliott Thomas, Garrett Thomas, Gavin Thomas (Anna) and Ben Peterson. Great nieces Savannah Thomas, Mikalyn Thomas and EmmoryKate Thomas. Devoted friends Butch and Marquette Dillion. Also two step daughter’s, Carol Jones and Robin Woolsey, and several nieces and nephews all from Mobile, ALA.
There will be a Celebration Of Life in Marianna, Fla at a later date.