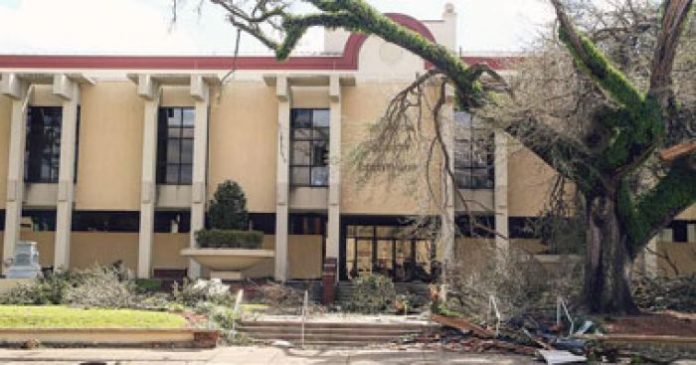 A renovation project to the Jackson County courthouse was expected to take six months to complete. Those renovations are predicted to be done a little early, thanks in part to Hurricane Michael.

Offices were moved out of the courthouse immediately following the hurricane with some of those offices having moved back into the courthouse at this time. Other offices are still at temporary locations and working to make the best of their situation.

All judicial offices are housed away from the courthouse that were located on the second floor with county judge Wade Mercer and his staff having returned in January to their downstairs offices. They are holding first appearances at the county jail each morning and court is being held at the Ag Center on Highway 90.

The Jackson County courthouse was built in 1962 and since then it’s only had minor renovations. Renovations were in place at the time Michael made its appearance in Jackson County, leaving all offices damaged, some more than others.

“It was primarily going to be renovating the courtrooms, inmate holding cells and all of the restrooms in the building,” said Amber Baggett, court operations consultant.

The renovation project is estimated to cost roughly 1.3 million dollars. Though the courthouse is a county building, the funding for the project is coming from a court facility fund.

“The money is generated in a fund from court fines that are paid so it’s not a tax burden for the citizens,” Baggett said.

The project was set to start in January, but it was set back because of the hurricane. The courthouse received significant damage to the north side of the building causing the entire second floor to be temporarily relocated.

Officials said that hasn’t stopped the courts from serving.  “Some criminal jury trials got backed up a little bit, just on facility needs and to make sure everybody is safe but everything else is full board,” said Circuit Judge, James Goodman.

Judge Goodman said the relocation has caused a few hiccups, but they’re making it work and plan to be back in the courthouse early July.  “So, it’s just a space issue,” Judge Goodman said. “But we’re like a lot of people in this area, we’re doing the best that we can at this time and we’re hoping to come out stronger on the back side of it.”

At this time,  the county doesn’t have an estimated cost for hurricane Michael repairs.