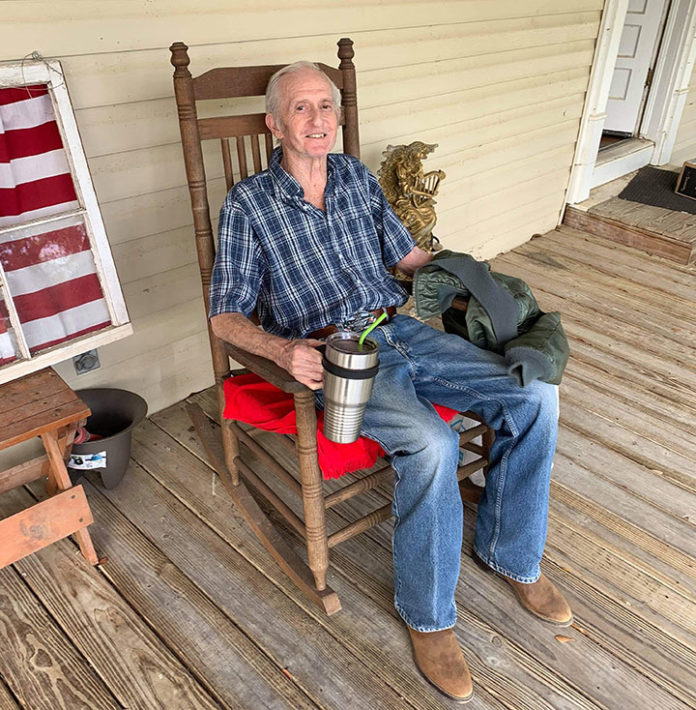 Every student has memories of at least one teacher; some remember several who impacted their lives, academically and otherwise, and whose influence has lasted throughout their lifetime.  Marianna High School students who were enrolled in higher mathematics and physics courses were especially fortunate to have had a classroom experience with one of the area’s most highly regarded instructors in the math and science areas.  Gerald Chatwood was not only amazingly knowledgeable where the theory of these courses was concerned; he was also extremely experienced in the practical applications of those theories.  Gerald himself graduated from Marianna High School in 1954.  His first step after graduation was to join the United States Air Force.  After completing basic training, Gerald went to Global Radio Maintenance Technical School as an enlisted man.  He then served three years in England where he did radio maintenance for all ground radio on base including ambulance, security police mobile and base station headquarters to communicate with other bases.

In the seven years that Chatwood was an enlisted serviceman, his highest rank was that of staff sergeant.  Recognized by the Air Force to have outstanding acumen for academic and technical facets of engineering, the staff sergeant was chosen to attend Arizona State University to pursue his Bachelor’s degree in electrical engineering.  Upon completion of that degree, Chatwood was selected to continue his studies at the Air Force Institute of Technology at Wright- Patterson Air Force Base in Ohio in order to obtain his Master’s degree in Systems Engineering, a two year program.  The completion of these studies saw him moved from enlisted status to officer and led the way to more intensive work on rocket and flight systems.  While in the Air Force, some of his assignments and duty stations included working on Titan I, Titan II and Titan III, the Inter-Continental Ballistic Missile development program, pilot training at Williams Air Force Base in Arizona and training in the F-4, with later duty to F-16 and then transition to F-22.

Chatwood also worked at Space and Missile Systems, headquartered in Los Angeles, California, Vandenberg Air Force Base in California, missile launches for classified satellite booster deployment in space that included reentry vehicles and their Titan I, Titan II and Titan III launch vehicle boosters. The remainder of his career included classified space programs, as well as work on Project Blue about UFOs. He served 20 years and retired with the rank of Major.

Gerald Chatwood was born March 9, 1936 in Marianna during the depression. Both of his parents were born in Marianna. His mother was Francis Daffin Chatwood and his dad was Omar. During the war, his mom worked on helping build ships and quickly became known as a Rosie the Riveter. His father was a heavy equipment mechanic and, in Gerald’s eyes, the best auto mechanic around during that time.

Young Gerald lived part of his earlier life between Florida and Indiana. While his parents were looking for work in Indiana, he stayed with Ma and Pa Anderson and a lifelong childhood friend, Johnny Cox. The two boys grown to manhood finally reunited Oct 2019 after 63 years.

During Gerald’s time in Indiana, he worked weekends and school vacations on a sawmill with a couple named John and Pearl Stockman. He said he got his religious influence from Ma and Pa and his life experience at the sawmill. He always enjoyed coming home to Florida because he loved to hunt and fish. Students and friends always enjoyed stories about his going directly from hunting to getting on the school bus with his gun. He said he could take a coin and unscrew the gun and take it apart so it would fit into his school locker. The family moved back to Florida during Jerry’s sophomore year of high school. He played football for MHS. He notes that his fondest school memories were at Marianna High as a student and later as a teacher.

His life adventures and success with the Air Force regaled many students through the years, but even the most reluctant student attests to his ability to take highly abstract and technical material and make it both interesting and understandable.  His exuberant, relaxed attitude put students at ease but they knew that he was passionate about the content he taught as well as the applications which he had experienced personally.  He was that rare teacher who could explain exactly how and in what instances a certain formula or bit of knowledge would prove useful in life.  A former pilot, a retired Air Force officer, he commanded the respect of those whom he taught and his insight inspired them to acquire the math and science skills he taught.  On occasion, he teased his students with tidbits about what was happening in the military services in the present and even once brought his flight helmet to school for their inspection.  The helmet, on that day, complemented his usual attire of jeans, cowboy boots, plaid shirt and leather flight jacket.  Students knew he was there to work and so were they.

According to Jeff Skipper, his stepson, Gerald Chatwood was the best thing to happen to him in his life. Even though he was a stepdad, Skipper said he always treated him as his own. Countless other students took what he offered them in both academic and personal areas and used these in making their own lives better.  He was indeed a favorite among students; he was known for his fairness and devotion to skills acquisition and never played favorites.

Some of his greatest joys and accomplishments were his years of teaching. He loved his students and always enjoys hearing from them. When we talked with him about his success as a teacher, he said, “What I tried to do was focus on the homework, it might be midnight before I finished grading, but I always got them graded and handed back to them the next day. That way, I didn’t get behind and that way we could move on. I had some really great students. They were just the top-of-the-line students.” Chatwood says he enjoyed all of his students, “I showed up early for school so that when the students came in on the early busses, I had some time and they could go ahead and come into my room if they had any problems with the homework or something I could help them with. I stayed after school and helped those who couldn’t make it in the morning.”  The biggest smiles from Chatwood, according to his family, come from when he is read comments from one of his students on social media or cards that are sent to him. He taught all four grades at MHS, ninth through twelfth. He said when he started teaching, he had some remedial classes, “What I found out was with those students, often times all they needed was some encouragement and then I could bring them on into my higher math classes and improve their achievement a whole lot.”

Chatwood found that an overhead projector was his most effective tool, “I found out that when I used the overhead projector, I faced the students. Anytime that anyone didn’t understand something, all they had to do was just raise their hand and you tell me what you don’t understand, and we will go over it. You have to be careful when you teach the advanced studies. You motivate the students, but you want to make sure you get them to answer the questions at any point in time. You have to take the time to go over it. You don’t want to go over it so quickly that they don’t have time to ask questions because if you’re just up there talking to them, then you’re not teaching. You have to let them have the opportunity to respond and ask questions. It’s complicated subject material. I always enjoyed letting them ask their questions. Because I did a lot of work for the Air Force, in my lessons, I would come up with practical applications of what they could look forward to doing if they did well and stayed in the technical aspects of whatever career field they fell into.”

During and after his teaching years he did contract work with the government most of which was classified. His students used to try to guess what mission he was on when he was not at school.  And, of course, Gerald delighted at increasing their curiosity.  For all of his knowledge and the high expectations, he was genuinely “down to earth” and could work with everyone.

“ I taught Calculus, Trigonometry, Analytical Geometry, Algebra I, Algebra II, Physics I and Physics II and continued to work special ops contract for the Air Force as needed.  My classroom was a pleasant place as I wanted it to be and I feel that facing the kids, checking for their comprehension, and encouragement from me led to much success for those I taught.  A teacher’s greatest reward comes from the success and respect of his students and his colleagues,” said Chatwood.