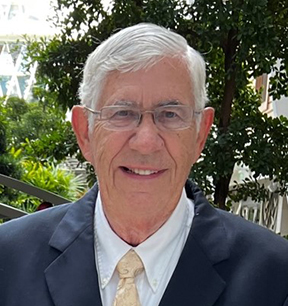 Dr. William Eugene (Gene) Hill, 80, fully entered the Lord’s presence on Monday, November 7, 2022, following a short battle with cancer. At the time of his death, he was surrounded by his loving wife Marcia of 59 years, his children, and grandchildren. He was born on November 9, 1941 to William Rasberry Hill and Vera Renfroe Hill in Marianna, FL. He was a beloved husband and patriarch, an influential professor at Auburn University, and most importantly a born-again Christian.

Please join us in a celebration of his life at Parkway Baptist Church of Auburn, AL on Friday, November 11, 2022. Visitation will begin at 10 AM and service at 11:30 AM. Interment to follow at Town Creek Cemetery. In lieu of flowers, the family requests memorial donations be made to The Gideons International, an organization that places Bibles around the world in which Gene served faithfully for many years.

Gene earned his BS in Chemistry in 1963 and his MS in Inorganic Chemistry in 1965 from Florida State University. He also earned his Ph.D. in Inorganic Chemistry in 1970 from the University of Strathclyde in Glasgow, Scotland. He had a successful career working as a rocket scientist in Huntsville, AL with Rohm and Haas Chemical Company. Gene accepted a faculty position at Auburn University in 1970 and throughout his career at Auburn, he enjoyed teaching undergraduate and graduate students. He directed twelve Ph.D. students and eight MS students to their degrees. He has 85 publications in peer-reviewed journals and over 100 publications. Gene has 8 patents from his chemical research. While at Auburn, he obtained grants totaling more than two million dollars in support of his research. He was the leader of the Inorganic Division in the Department of Chemistry for many years. Gene served as the chair of the Department of Chemistry and Biochemistry at Auburn from 2004-2005, his final year before retirement in 2005. He served as the chair of the building committee for the current Chemistry Building at Auburn University. In addition to his work in the Department of Chemistry, Gene also served on many essential university committees including the Faculty Senate and the Graduate Council. He retired as Professor Emeritus from Auburn University in 2005.

While in Auburn, Gene and Marcia joined Parkway Baptist Church in 1970 where Gene served as Chairman of Deacons for many years. He was the church’s first outreach leader. Alongside Marcia, Gene taught young married college students in Sunday School, retreats, and fellowships for 21 years. Gene served on the Alabama Board of Missions for six years as a representative for the local association. Gene and Marcia also worked with the Alabama Missionary Parents Fellowship. Together they have done mission work in AL, VA, FL, NH, AK, TN, and LA. They have also worked internationally in Zambia, Morocco, Canada, Spain, England, Venezuela, and Guatemala. In 1972, Gene joined The Gideons International which places Bibles around the world. He continued to serve the Gideons throughout his life.

Gene enjoyed spending time with his family and traveling the world with Marcia. He is remembered as a devout husband, faithful father, loving grandfather, and friend. He was an example to many of how to honor the Lord in the home, workplace, and church. He will be missed by family and friends.