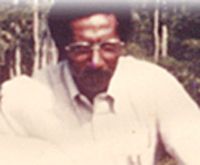 He was preceded in death by his loving wife of 35 years; Ida Mae Speights, his parents, three brothers and four sisters.