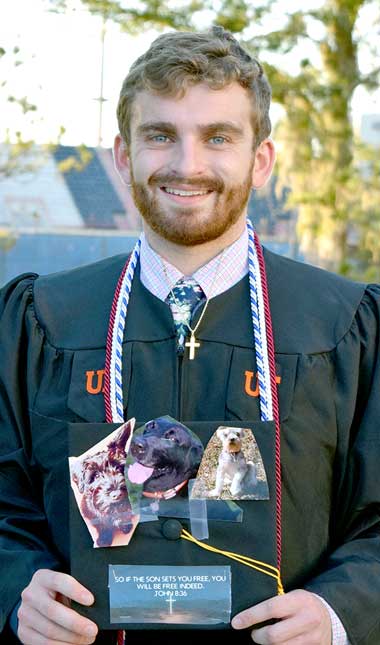 William Webb Marcus “Bill” Braxton passed away Friday, March 13th, at the age of 23. Born and raised in Marianna, Bill graduated from Marianna High School in 2015, where he played football and soccer and was inducted into the National Honor Society. In his senior year at MHS, Bill served as class president after having run on a platform that focused on addressing the needs of “all of us.” Bill returned to the school while attending Chipola College as the JV Football offensive line coach. He graduated from Chipola in 2017 and earned a Bachelor of Science from the University of Florida, graduating cum laude in 2019. Bill was recently accepted into graduate programs at both University of Florida and Florida State University. While at Florida, Bill was an active volunteer with several charitable organizations as well as a member of Sigma Phi Epsilon and of Greenhouse Church’s youth ministry.
Bill’s lifelong commitment to serving others grew into a passion for social justice. He was drawn to Greenhouse because of the church’s commitment to Jesus’ teachings about helping strangers and serving the poor. With the church, he traveled to Jackson, Mississippi in the summer of 2019 to volunteer with the John & Vera Mae Perkins Foundation on community empowerment projects serving Jackson’s impoverished Westside neighborhoods. Among his many other contributions to improving the lives of others, Bill volunteered at Littlewood Elementary School in Gainesville helping third graders with disabilities and served as the Vice President of Reason to Give, an organization focused on providing displaced individuals with meals and conversation to affirm their dignity as human beings.
Bill will be remembered for his boundless sense of humor, vast generosity and endless curiosity. He is survived by his mother and father, Judi and Mark Braxton of Marianna; brothers Ben Bennett of Bethlehem, Pennsylvania and Anthony Bennett of Jacksonville, Florida (along with sister-in-law Danielle Bennett); sister Sallyanne Monroe “Annie” Wilson of Panama City, Florida (along with brother-in-law John Wilson); and nephew and niece Owen and Amelia Bennett of Jacksonville. Bill’s funeral will be held at the Marianna High School gymnasium at 11am on Wednesday, March 18th. The family will receive friends at the High School from 10-11 am prior to the service. Graveside services will be held at Pinecrest Memorial Gardens following the service; in lieu of flowers, the family welcomes donations to the Chipola College Foundation where a scholarship will be endowed in Bill’s name.