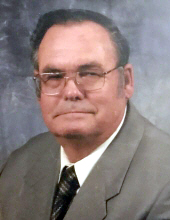 William R. Ray, 81, of Marianna, Florida, passed away at his home on Saturday, November 23, 2019.
Mr. Ray was born on May 4, 1938 in Jackson County. His parents, Arthur and Thelma Hart Ray preceded him in death.
William grew up in the Lovedale Community. He worked at the maintenance department at Sunland for over thirty years. He farmed on the side and enjoyed planting and harvest time. Often he spoke of being a young boy and curing tobacco, picking cotton, and plowing up peanuts. He was a hard working man and never complained. His greatest joy was his family for whom he would do anything. He was forever doing for the children and making sure they had plenty to eat, lending them his time, his help, his vehicles, or just making sure they had what they needed. He always placed his family first and thought little of his own needs
He is survived by his wife, Violet Jarrard Ray; his stepdaughters Bobbie Brock, Sarah Scott, Betty Roberts and husband, Steve, Janice Toole, and husband, Mitchell. “Pawpaw” as he was affectionally known by his five grandchildren, Whitney Mathis, Jacob Brock, Logan Westerling, Dylan Toole, and Andrew Toole; Six great grandchildren, Gage Mathis, Hunter Mathis, Owen Morgan, Hunter Sanders, Remington Westerling, and Kimber Anne Westerling; his two sisters, Mary Nell Harris, and her children, Kenny, Donald, and Zachary Harris (Susan), and Sharon Charles; her son, James Charles (Tatiana) and three great nephews.
William’s home going service will be a 2 pm Wednesday, November 27, 2019 at James and Sikes Funeral Home Maddox Chapel with pastor John Lawrence officiating. Interment will follow in the Cypress Cemetery with James & Sikes Funeral Home Maddox Chapel directing.
The family would like to thank Dr. Rami Khoury with Southern Medical Group in Tallahassee, Florida for his compassion and un-relentless care after Pawpaw had his heart attack and Dr. Jirayos Chin for his faithful care of him through out the years.
Our family was blessed and is thankful to God that Pawpaw was able to communicate with his family, drive, go to the grocery store, and enjoy his favorite pastimes, walking, working in the yard and sitting on the porch, throughout his life.
The family will receive friends at 1:00 p.m. prior to the service.
If desired, expressions of sympathy may be made online at www.jamesandsikesfuneralhomes.com