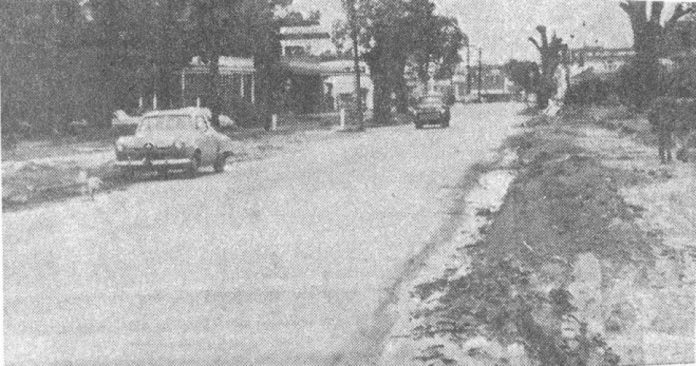 Being often asked this question, this writer will attempt to remind us all of the Russ Street to Caledonia Street canopy that existed prior to the early 1950’s when the canopy disappeared and she will reminisce about the beautiful homes which were so famously framed by the wonderful trees. The photo entitled “Man-made Hurricane Hits Marianna” explains exactly what happened to the trees. It states that workers from the Coggon and Deermont Company proceeded rapidly in the work of widening State Road 10 (US 90) from Caledonia to Russ Street, a distance of four-tenths of a mile. The job calls for the street to be widened to a width of 44 feet from the present width of 30 feet.

The beautiful street had previously appeared as in the following photograph. Yes, the huge trees actually did form a canopy from near Russ Street to Wynn Street. East of Wynn Street there were few trees as service stations and other commercial businesses were located in this area. The fine old homes were lovingly cared for until, in most cases, the cost of the upkeep, taxes and necessary refurbishing took its toll. While we lost so many of the old homes, it is the delight of “old Marianna folks” who love our historical homes, that we have been able to save as many as we have, and that so many are being used so well today.

The area from Russ Street to Wynn Street was nicknamed “Silk Stocking Avenue,” as the entire area was filled with lovely homes.

Beginning on the south side of the street, one would see the lovely home of the Baltzell Family. There was a fire in the home at one time and the home was rebuilt as a one-story house. The home was located across the street from the Baltzell Hospital on the corner of Russ Street. This was the only hospital in Marianna. This home was transformed into Protenza Beauty Salon by Dana Torbett several years ago.

Next on the south side was the John Milton, Jr. home. He was the great- grandson of Governor John Milton. The 1898 home was built by W. J. Daniel for his daughter, Floie, when she married John Milton. W. J. Daniel was a banker, establishing, with his partners, the bank which later became First Bank of Marianna. That 1902 bank building is on the west side of Confederate Memorial Park. This is the family of present Marianna residents John Milton V and Creshull Harrison and their families. The home was torn down in 1958 and a service station was erected there. It is currently the site of ERA Chipola Realty.

Next, going east, was the home of the McLane Family who used it as an apartment house in its later years. The home was built by the Singletary Family. The McLane Home can be seen in this photo as it sits across the street from the Baltzell Hospital. Jim’s Buffet and Grill is on this property’s old site.

Next was the home of the R.L. Hinson family. Dick Hinson and Beth Quick were raised in this home, and Alice Dickson’s home was the next home place. This would be the current home of KFC .

The next place was the very large 1912 home of Senator W.H. Milton. Most of the timber for this home was cut from the Milton Plantation near Blue Springs. The large two-story home was known as Miltonia. It had six bedrooms and three baths. There were nine fireplaces in the home, but there was a central hot air furnace in the basement which burned wood and coal. The house was disassembled in 1976, with columns and staircases being used in a house being built in Atlanta, Georgia. The Pizza Hut sits on the site of this home. #6: PHOTO OF MILTONIA

The next house was the Holden Home which was built prior to the Battle of Marianna. Bullets from rifles used at that time were found lodged in the home in several places when it was renovated by Floye Brewton in the late 1980’s. The home has housed several offices there since its renovation.

East of the Holden’s was the James MacKinnon Home which was expanded during WW II while the Army Air Base was here, adding bedrooms to accommodate the overflow of the city as the airmen came with no facilities for housing. A very nice restaurant, named “Magnolia” was in the house at one time. Mrs. MacKinnon was a life-long teacher, serving as Principal of Golson Elementary School for many years. The home was purchased and restored by Floye Brewton, who removed all additions to the original home. The home was later beautifully renovated and updated to accommodate Attorney Shannon Saunders’s law office.

Next was the very large home of the John Carter Family, later the home of Mrs. Lamar Gammon and her family and Miss Roberta Carter, long-time history teacher at Marianna High School.

This home was built by the Wynn Family for whom Wynn Street was named. Most of these homes had deep lots, going to the railroad.

Across Wynn Street is the lovely brick home of the F.C. Daffin family, now owned and beautifully renovated by Harvey and Maxine Wilbanks.

Next, where the Mexican restaurant sits today, was the home of the Paul Carters, an attorney. Mrs. Carter taught piano in the parlor of the beautiful two-story home to hundreds of Marianna children in her lifetime.