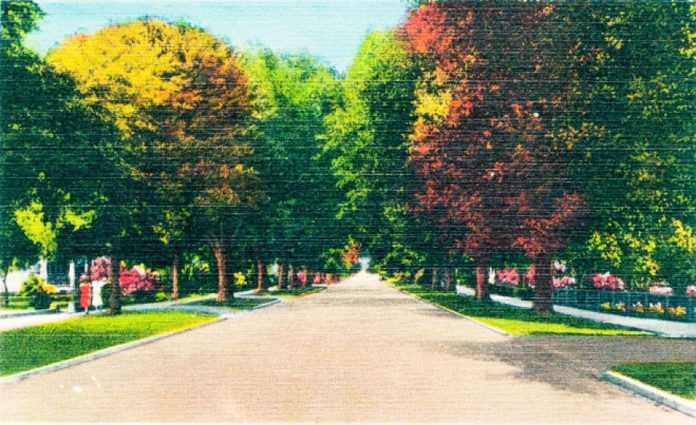 We are remembering again of the beauty of the west entrance to Marianna before the “Man-made Hurricane” hit Lafayette Street.

Since we aren’t sure exactly when the “Man-made Hurricane” came through, we will say early 60’s. Someone may have a memory which will place an exact date on “the happening.”

Across the street from Mrs. Paul Carter’s house was the beautiful home of Mr. and Mrs. Sam Renfroe.

A write-up in a 1930’s Marianna Directory tells about the Renfroe home and the beauty of her flowers. The blooming flowers in the photo are massive plantings of hydrangeas in pink and blue which surrounded the home and bloomed most of the summer. It states that the home was white with green trim. Sam Renfroe would be remembered as one of the two gentlemen who realized that there was a GI bill for WW II young veterans to go to college and that there was an abandoned airbase full of empty buildings north of town which needed to be used. He and Roy Beall “pulled a LOT of strings” in Marianna, Tallahassee and Washington, D.C. to allow Chipola College to be organized at the old airbase…later moved to College Street and “the rest of that story is history”.

West of the Renfore home was the large two-story home of the Smith family, torn down to build the present building.

Crossing Wynn Street we are at the beautiful St. Luke’s Episcopal Church and churchyard where we can walk through a cemetery which has graves dating back to 1845 and 1849. There are many people of note buried in the churchyard, but of particular interest is Confederate Governor John Milton, buried in April 1864.

The beautiful church is noted for all the wonderful memorial windows with the “friendship” window high in the west wall, and another spectacular window on the east wall above the altar area. The 27 stained glass memorial windows really are unusual in our part of the world and “spectacular” is the most accurate word to describe them. St. Luke’s windows are just extraordinary and well worth anyone taking time to stop in and visit or to worship with the congregation and savor the beauty of the windows. What you see from the outside is not anything like seeing them from inside with the natural light shining through. The church and the churchyard are such wonderful tributes to God by this congregation and a true treasure for Marianna.

The next home west of the churchyard is the Nonie Dekle Milton home, completed in1927. The home was built by M.L. Dekle for his daughter. (Other homes on Green and Putnam Streets were also built for his daughters and other family members near the present Dekle-Brunner House, which was his home.) This home was built here because there were two very large live oak trees in the front yard of an existing house which was removed, which Nonie favored. Both trees are still standing. Her five children, John Dekle Milton, Robert H. Milton, Ronald A Milton, Stella M. Higdon and, Nell Dekle M. Robb, the mother of the current owners, were raised in this house. Nonie lived here from 1927 until her death in 1969.

The house appears to be of stucco exterior finish, but it is actually a rather unusual finish known as “pebbledash”, which are pebbles mixed into concrete which is thrown onto the exterior of the home.

The beautiful home was restored in 2004-2005 and should serve the Dekle-Milton family members very well for many more years.

The next home is the 1902 Marmaduke Dickson home which is now owned and recently renovated by Charles and Ora Mock. The home was originally restored by Floye Brewton, where he lived for several years. The Mocks recently added a large family room and a “dream” kitchen on the rear of the house. They have retained the Queen Anne style Victorian home as it was in the original house, but the addition is a modern, comfortable 21st century touch to make the home a perfect place to enjoy family and to live very comfortably for many years.

The next home was known as Coral’s Gables and was one of the oldest homes in Marianna, reportedly built by the Bullard family. The Burtons purchased the home in 1903. The house had nine Doric columns across the front which was indicative of homes built in the mid 1800’s. Mrs. Burton was named Coral, as was her daughter, Coral Davis. The house had two gables. The Davis family lived there for many years prior to the home being moved from that location to Wacissa, Florida, in Jefferson County. The Pelt Eye Clinic is on the location of Coral’s Gables. For a number of years there was a small white house east of the Pelt’s parking area which was moved from the site prior to the Pelt’s purchase.

Of course, Hinson’s Bed and Breakfast is the next home. The 1920’s house was owned by the J.W. Hinson family and was purchased by Sid and Judy Riley in 1996 and converted into Marianna’s only “Bed and Breakfast”. The home is frequented by families who want to stay together in one location for special events, such as weddings, etc. Also, many professionals who often travel through Marianna prefer the B&B to motel life. Often the traveling public searches for a B&B rather than a traditional travel location. It is a beautiful home reflecting the 1920’s era and is always ready for Christmas. It was built on property which was originally part of the Ely-Criglar estate, which brings us to the next house on the block, the Ely-Criglar Mansion.

Francis Ely built the house about 1840 with brick which were produced on the site. The house originally had an east and a west wing. The east wing was the kitchen and dining area and the west wing was bedrooms. The west wing was moved to the Russ Street location where it may be seen today as the 1840’s House. It originally sat north of and behind the Baltzell Hospital which was on the corner. Both of these houses are on the National Register of Historical Places.

The Ely-Criglar home is one of Marianna’s most spectacular old homes which was restored several years ago by Floye Brewton, and was recently refurbished by the Larry Kinsolvings, both attorneys, who moved to Marianna upon their retirement several years ago. The Kinsolvings have greatly enhanced the beauty and comfort of the home, adding an elevator to facilitate getting from the first to the second floor where they have their personal sitting area and bedrooms. This home deserves to have its own story told, which will be done very soon. Ruth Kinsolving was raised in Marianna and is the daughter of Ben and Elizabeth Barnes. Marianna is certainly fortunate to have them here as a part of our city. They are very generous to host events in the home, opening it often to tours of the city among many other opportunities to share the beautiful ante-bellum home. They are also very generous volunteers with their time and energy. Marianna is indeed fortunate that they chose to share their lives with us here.

The next building that was there, as mentioned, was the Baltzell Hospital, which was the only hospital until Jackson Hospital was built in the early 1940’s. When the Baltzells closed the hospital, it was converted into the Runnymede Hotel (also called the Marianne Hotel for some time) where a number of families lived for many years. As stated, when the entire Lafayette Street was widened, the hospital/apartment building/hotel was torn down in the 70’s to allow the corner of Lafayette Street at Russ Street to be widened and the curve made less severe than it formerly was. Floye Brewton told that if you dug a little in the south yard/parking area of the 1840’s House one would find the remains of the old hospital as they only removed the absolutely necessary portion of the building and much of its foundation is still there. There is a group of Marianna adults who were born in the early 1940’s at the Baltzell Hospital. They meet regularly for lunch, and they call themselves “The Baltzell Babies.”

This concludes our “walk down Silk Stocking Avenue” remembering it as it was when the trees were framing each home on either side of the street. It was, indeed, a beautiful sight to behold and many can use their imaginations to reconstruct “the avenue” with the beautiful homes and trees. It is certainly sad when something so beautiful and so unique changes, but so is life. Progress moves on and our lives and surroundings change. It is still wonderful to experience “small city life”. Many Marianna natives treasure our memories of “Our Wonderful World.”

Note: Special thanks to John Brewer who always so graciously enhances our photos to make old photos look new, and to others who shared special details of facts and memories of old Lafayette Street.