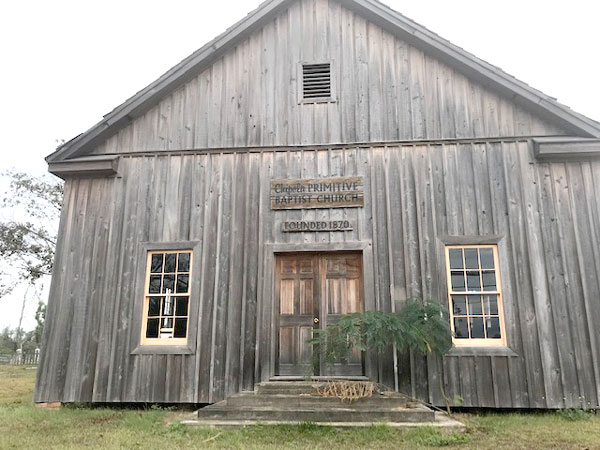 On a recent trip through Altha, Florida, my sisters and I asked to stop at a small Primitive Baptist church. We planned to look for the graves of our grandparents, Clarissa Ray Cook and James Elias Cook. We were unsuccessful in finding my grandfather’s grave, but immediately stumbled across the graves of our maternal great- grandparents, George Nelson Ray, and Nancy Harrison Ray. Those graves were located very near the church building, probably because Elder Ray had served as the first preacher of the church.
Primitive Baptist preachers are called Elders, because title of Reverend is believed to apply to God only, not men. Mankind is presumed by Primitive Baptists to be hopelessly depraved and doomed unless saved by the Grace of God.
The small size of the church surprised me but being small and simple is part of its beliefs. Each church is more like an extended family than are larger Christian congregations. Primitive Baptists base their beliefs on the practices of Christians only as described in the New Testament. The word primitive is meant as being original, not just simple.
The first Primitive Baptist Church in our country was established in Black Rock, Maryland in 1832. It appealed to people of meager means, because tithing was not required, its preachers were unpaid, and musical instruments were not purchased. Singing was a Capello. Electricity and song books are allowed as being aids to worship, but not additions to worship, which usually included only preaching, praying and singing. They believed that tithing was required of the children of Israel in the Old Testament and thus did not apply to those whose faith is based on the New Testament. Giving is meant to come from the heart and should remain within a person’s means. With financial gifts, freely given, those in Altha managed to build a small church and minister to each other.
For Primitive Baptists, there are only three ordinances: Baptism, Communion and Foot Washing. Foot washing takes place during communion and is mentioned in both the old Testament and the New Testament. It was practiced as a symbol of spiritual cleanliness and servitude to one another.
Men wash the feet of other men and women wash the feet of other women. Baptism by immersion must be performed only by a minister, who has been called by the Holy Spirit to serve the congregation. The word baptism is a Greek word, meaning immersion, and as Christ was baptized by immersion, Primitive Baptist do the same.
Primitive Baptists believe that Salvation is a gift of God’s grace, which may be given to anyone, anywhere. Therefore, even infants, heathens, foreigners, and the mentally impaired can be saved. “Ask and you will receive,” applies to Salvation, which cannot be earned, but is generously given to those who want it, who “hunger and thirst for righteousness.”
Primitive Baptist Churches first took firm root in Appalachia, where people of little means lived simply and interacted with other families within a relatively small area. When moved further South, Primitive Baptists brought their religious beliefs with them.
African Americans were also attracted to the Primitive Baptists, who were sometimes referred to as “Hard Shell” Baptists. They, like other Primitive Baptists, had neither the means nor the inclination to support a foreign mission board or theological seminaries. Primitive Baptists believed that if a person feels called by the spirit to preach to foreigners, he should just go and pay his own way. Unlike Biblical scholars of today, who believe that Biblical writing is mostly metaphorical, they believe every word of the Bible is literally true.
Living in Marianna, my Grandmother Cook, was rarely able to attend the Altha church, but found an African American Primitive Baptist church within walking distance. She once took me with her to an evening service there, where we sat outside on the steps, listening to an enthusiastic minister shout and half-sing his message, but it was the members singing that we loved most. I found it amazing that people so poor and oppressed, could nevertheless rejoice and praise God for their blessings.
There were no Sunday Schools in Primitive Baptist Churches. It was considered the parents’ duty to instruct their own children, who attended services with them. Behavior rules for members of all ages were as strict as those of their pilgrim ancestors. Smoking, drinking, card games and social dancing were banned.
The one concession to their offspring of courting age was a practice called “bundling.” Grandmother Cook told me that teenagers of both sexes could attend sleepovers at the church, where they were securely bound in quilts or blankets. Chaperons made sure the young people stayed in their bindings, but just being allowed to sleep beside each other and allowed to whisper to the opposite sex during the night was exciting. It was also a good way to learn what the other person was really like. Parents allowed this, because it was hoped and expected that their children would marry within their own faith.
This caused a problem when my great grandmother, Nancy Jones, met George Nelson Ray. Her family were affluent Methodists in South Georgia, and her father, William B. Jones, did not look kindly on her marrying an unpaid preacher. Elder Ray was admired for his riveting sermons, not for his farming skills. Nancy’s father told her that if she married that poor preacher, neither he, she, nor their children would ever be welcome in his house. George Nelson Ray had a persuasive way with words, though, and the deeply religious Nancy married him against her father’s wishes.
Grandmother Cook once took her oldest child, my mother, to be introduced to her great grandmother, Ann Harrison Jones. Mother remembered visiting a big, white house in South Georgia, where they were not allowed inside. The women were made to do their visiting on the front steps.

A heat advisory has been issued for Jackson County.