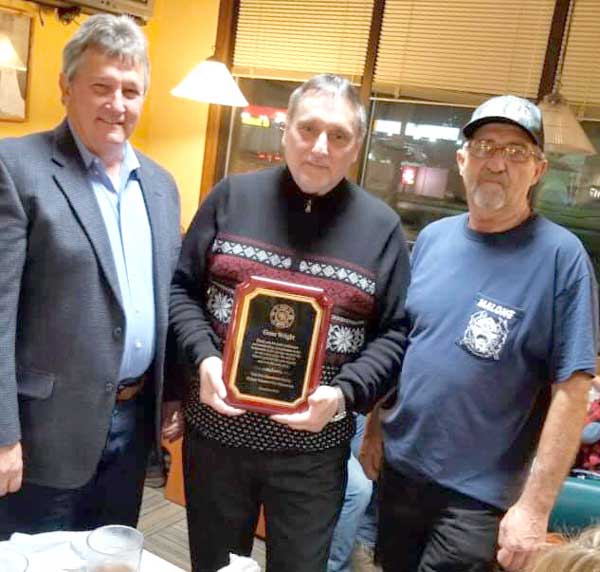 Those who know Malone Mayor Gene Wright, know he knows how to take care of his town and his residents. With that being said, he goes the extra mile to look after his volunteer firemen for all they do for the town of Malone.
Wright is quick to acknowledge that his volunteers are not just firemen, “These guys respond to whatever is needed. Sometimes it’s a limb on a house, someone needing food or medicine brought to them, whatever the need, they answer it. You couldn’t ask for a better group to look after Malone.”
Following a meal and little socialization time, plaques were handed out to some of the volunteers. District Five County Commissioner Jim Peacock assisted Mayor Wright in awarding Jeff Worthington the Volunteer Firefighter of the Year Award. They presented the Rookie Firefighter of the Year Award to Jared Long. There was a special recognition given to Chief Ken Cook. All were recognized for their invaluable work and dedication during the aftermath of Hurricane Michael.
The recognition didn’t stop there as they made sure the Town of Malone employees were duly recognized for the work they do day in and day out. Town clerk Linda Wilson, maintenance supervisor John Cross, assistant clerk Joyce Salvador and assistant maintenance supervisor Willie Williams.
Wright found himself at a loss for words when he was presented a plaque for his dedication to the Town of Malone by Jeff Worthington and Commissioner Jim Peacock.
It took less than a half a minute for the news to spread about Wright’s plaque when social media was flooded with nothing but praise for Wright. One resident said of Wright, “Gene Wright there is not enough awards in the world to honor you for your service and dedication to the area. I honestly love to see your heart for the city in action. I am from Johnston, South Carolina a small town 27 miles from Augusta, Georgia. My hometown is about the size of Malone. If the mayor there could train with you, maybe he could save my home town that has 32 percent unemployment, vacant buildings everywhere, property taxes are just horrible.”
Another offered congratulations to the town council and volunteer firemen but didn’t leave out Wright, “Congratulations and all well deserved. However, where is the one for the person who moved in to City Hall when there was no electricity, so he could serve his citizens better. Where is the one for the person who moved into City Hall when there was no water. Where is the one for the person who arranged for all the food deliveries- for the entire area. Where is the plaque for the person who arranged for all the supplies – diapers, baby formula, etcetera and shared them with all his neighbors? Where is the plaque for Mayor Gene Wright? For after the storm he was one of my “heroes”.