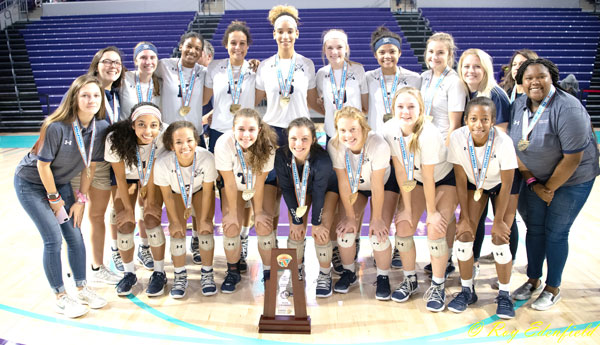 Seven come eleven and at the rate the Sneads Lady Pirates are going, that just may happen. The Lady Pirates were one game shy of a sweep Friday when they left the court against Newberry in possession of their seventh straight state 1A championship. That set a 1A record for consecutive wins as state champions in 1A volleyball.
The Lady Pirates handily took set one 25-16 before keeping the crowd on their seat in set two. In the end, it was an overtime 26-24 win for the Lady Pirates, with just one set win between them and another state championship. The Lady Pirates dropped set three 25-21 but came back strong to finish what they came after in set four. They won 25-22 to bring home their seventh straight title and their second one under coach Heather Brinkmeier Edge.
The season has been nothing short of phenomenal for the Lady Pirates, playing above their competition game in and game out to ready themselves to be able to accomplish this feat.
Throughout the year, it was a team effort game after game. Team leaders were spread amongst the team with Kiara Garrett leading the Lady Pirates in kills with 294, ranking her 54th in the nation. Total blocks leader was Michaela Edenfield with 69, and a 13th national ranking. Ranking 16th in the nation was Jordyn Riano with 90 serving aces. Freshmen Lily Glover wasted no time making an impact on the court with 580 digs on the season. Jordyn Riano ranked 51st in the nation with 989 assists while Lily Glover led the team with 470 receptions.
The team was welcomed home Saturday evening with a police escort and waiting fans. The TIMES will keep you informed of any activities scheduled to honor our seven-time state champions.
Congratulations from the publisher and staff of the Jackson County Times to the Lady Pirates on your awesome accomplishment.