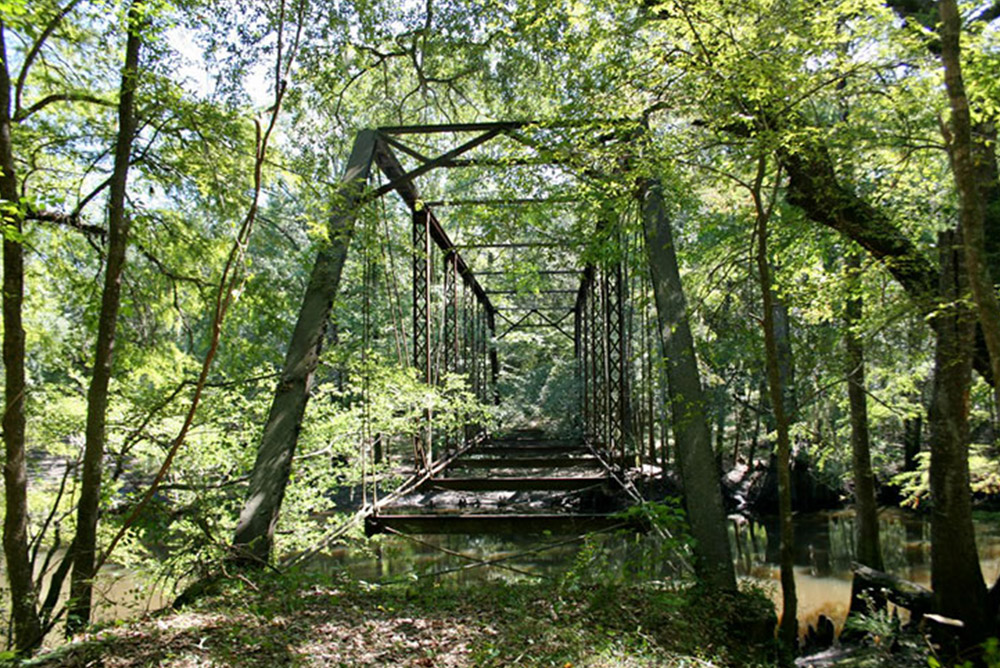 Local historian Dale Cox has written extensively about the Ghost of Bellamy Bridge. I, like most youngsters growing up in Jackson County, heard the story of the Ghost of Bellamy Bridge at an early age. As the tale goes, or at least the version that I grew up hearing, Elizabeth Bellamy died a tragic death on her wedding night in the 1800’s. Supposedly she and her wedding dress had gotten too close to a fireplace or candle and the dress caught on fire. In a panic she ran from the antebellum home in which the wedding was taking place and tried to make it to the Chipola River to douse the flames.

Unfortunately she was not able to make it to the river, which was near the site of what would become Bellamy Bridge, and she succumb to the flames. The legend, which is at least over 100 year old, has it that the ghost of Elizabeth Bellamy roams the woods and riverbank at Bellamy Bridge.

Dale Cox has researched how the legend came about and found a very interesting story in itself as to how the legend evolved. Elizabeth Bellamy was a real person, was married to a well to do early planter in our area named Samuel Bellamy and did in fact die a tragic death in the vicinity of what became Bellamy Bridge. But Samuel and Elizabeth had been married in their native state of North Carolina in 1834. Soon thereafter they packed up their bags and moved to the newly developing territory of Florida and settled in the rich fertile lands along the Chipola River near Marianna. In 1837 the family all came down with fever, mostly likely malaria which was common in the mosquito filled swampy areas of the Chipola River. Elizabeth died on May 11 and a week later their 18 month old young child also died. Samuel Bellamy somehow survived the deadly disease and buried his wife and child under an oak tree on the east side of the Chipola River, not far from the Bellamy Bridge area (see attached photo).

So how did the real facts of Elizabeth’s death morph into the ghost story? Caroline Lee Hentz, was a 19th century novelist and in one of her books published in 1853, titled Marcus Worland or The Long Moss Spring, she described a tragic wedding night death on the Bellamy Plantation. The bride to be had her dress catch on fire and died soon thereafter. However the incident she described was based on events that had taken place in Columbus, Georgia not Marianna. But is just so happened that Caroline Lee Hentz then moved to Marianna, where she spent the final days of her life. After her death she was laid to rest in the cemetery of St. Luke’s Episcopal Church in Marianna and over the years it would appear that the folks of Jackson County came to incorrectly believe that her novel had been based on Elizabeth Bellamy’s death. Hentz is most remembered these days for her 1854 novel “The Planter’s Northern Bride” which is a southern rebuttal to Harriet Beecher Stowe’s Uncle Tom’s Cabin.

Being the true historian that Dale Cox is though, he is quick to point out that he is not saying there is no Ghost of Bellamy Bridge. He just points out that the facts of how that ghost story came to be don’t match the real facts of Elizabeth Bellamy’s death. As far as this writer is concern, I tend not to believe in ghost. I can recall more that a few nights as a teenager back in the 70’s hanging out at Bellamy Bridge. And I remember one evening when the fog started rolling in late in the night. While I am sure we were in an altered state of mind, it was the 70’s you know, we began to see things in that fog that sure made us ask “Is that the Ghost of Bellamy Bridge?” To the best of my recollection we didn’t hang around long enough to find out. So is there a Ghost of Bellamy Bridge or not? You’ll have to decide for yourself.