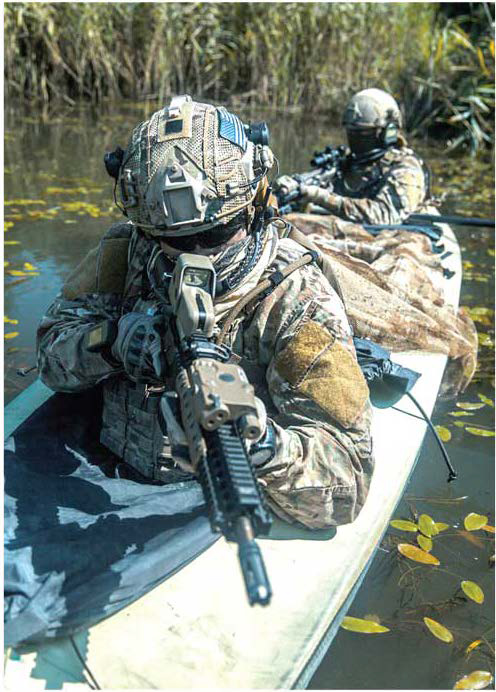 Art and Michele Kimbrough purchased the TEN8 Training Solutions special operations training facility just 28 days before Hurricane Michael descended on the panhandle in October of 2018, nearly destroying it. The Kimbroughs survived Hurricane Michael’s devastation, only to face the economic consequences of the COVID-19 Pandemic shutdown. But, through all these obstacles, the Kimbroughs never lost sight of where they were headed. They had a vision and knew it would take bold action and persistence to achieve it.

After reading an article in the TIMES about Major General David Morris, the Kimbroughs set their sights on a new, more focused direction to complete what was needed in their newest business venture.

Art Kimbrough and General Morris began conversing and discovered they both share a desire to help youngsters in our community become more aware of and interested in applying to the nation’s military academies. Morris is a graduate of West Point, and Kimbrough has served on the academy nomination selection committees for both US Representatives Southerland and Dunn. But, before their ideas about engaging and educating community leaders and school system administrators got fully off the ground, the pandemic brought the process to a halt. However, Morris said, “We haven’t given up on that. Although we did not have a lot of response from the school system, we are going to find a way to engage.”

Those conversations led to more discussions, and an announcement earlier this month that they have joined forces to help TEN8 Training Solutions LLC achieve its full potential. The Kimbroughs’ are proud and honored to announce that Major General David A. Morris, US Army (Ret) has accepted their invitation to serve as the new CEO of TEN8 Training Solutions LLC, with a focus on growing the TEN8 Tactics Military and Law Enforcement division. www.Ten8Tactics.com

Morris said in talking with Kimbrough, they realized they had a lot of shared interests and values, “He invited me to come out to the TEN8 training facility south of Altha in Calhoun County and speak with one of his Vistage CEO peer groups. So, I did that and enjoyed a tour of the facility. Not long after that he reached out to me and proposed that we partner. After very little thought, I agreed to the idea to team with Art and Michele as CEO of TEN8 Training Solutions’ TEN8 Tactics division.”

When asked about coming out of retirement for this task, Morris was very open, “Honestly, it’s not like a full time position, but I do something with it just about every day. Our intent is to get that facility presented in such a way that military and law enforcement units in the panhandle will want to use it for training. We’ve had some of that recently and are working on getting more.”

Experience in Special Forces and Intelligence.
Morris elaborated on his own experience, “I’ve been in a lot of different training facilities that do this kind of thing around the world and this one is really good. It offers live-fire training space, combined with a variety of facilities and access to the surrounding area. In my period of service, particularly in Special Forces, I learned a lot about what we call close-quarter battle and handling a variety of firearms under stressful conditions. So, I have that practical experience but also through various commands and supervisory roles throughout my career, that has allowed me to develop an organizational and management approach to training. So, I can appreciate what a facility like this can do. I still have ties to the military community and particularly Army Special Forces.” Morris continued, “the 7th Special Forces Group is located on Eglin Airforce Base at the Bull Simons compound and it is about an hour and 15-minute drive to the facility just south of Altha. Our facility offers Special Forces and other units a variety of training scenarios, that vary from what they use on a military base. It even offers the ability to insert vertical lift aircraft be it helicopters or the V22 Osprey. And because the facility offers billeting, catered food, planning space, and rehearsal space they can actually set up a forward operating base if they wanted to and use that to command and control exercises they might be running in the Apalachicola National Forest or surrounding areas.”

Morris said from a military perspective it’s not TEN8’s intent to say that they are going to train you, “It’s us offering a first-rate facility with support so that they can come in and have access to a different training site than they’re used to. This mixes things up for them and makes it more challenging and more rewarding. It helps them hone their skills. That’s my primary goal: to get Special Operations units from across the U.S. Military into our facility. With close access to the Apalachicola River, they can do small boat operations, riverine operations, and other types of training as they desire. For our nation’s special operations units, it’s about us providing a first-rate facility and support so they can run good, realistic exercises and get some valuable training without having to travel long distances and spend too much time away from home base -which is important for these units between deployments.”Co-owner Michele Kimbrough is also an Army veteran, having spent 10 years in the US Army as a skilled aviator–with security clearance—flying through the jungles of Central America on aircraft such as the Huey helicopter during the 1980s Nicaraguan /Communist crisis, and all over the skies of Europe in a C-12 turboprop.

“I went into the Army in 1982,” she said, “and they asked me if I wanted to apply for flight school. I chose MI (Military Intelligence) as a primary branch, since at the time, aviation was not a branch, such as artillery and infantry.”

She was stationed nearby when the Berlin wall fell in 1989. She never engaged in direct combat, but action was nearby as she quickly became something of a pioneer female pilot. She was deployed to Honduras, flying Huey choppers as part of the S-2 intelligence in the info wars against the Sandinistas in neighboring Nicaragua and El Salvador. She also flew surveillance and U-21 Army reconnaissance U-21 flights in the sophisticated, special equipment-laden “Beech Queen Air” planes. After being deployed to Europe, she was assigned to South Korea in 1988-89 to fly the OV-1D Mohawk. She learned to fly the Mohawks at Fort Rucker in Alabama.
Michele ended her career in aviation in 2014 after 10 years as an academic flight instructor at Ft. Rucker, where she began her career in aviation. She is now a full-time artist and entrepreneur, as owner of The Art Factory Gallery in downtown Marianna (still under renovation from hurricane damage), an officer and co-owner of Overstreet Funeral Group, and co-owner of TEN8 Training Solutions LLC.

Co-owner Art Kimbrough brings his business leadership skills to the venture to support the team. “My role is to provide the overarching vision, establish the financial foundation, secure top talent, and turn them loose to make it happen. We are so blessed to have General Morris as CEO of TEN8. Together with his enormous capability and reputation, Michele’s military experience, and the superb skills of team members Richard Biss, Joey Peacock, and others, we are poised to make a difference and succeed.” “Our focus during the pandemic is just on growing our TEN8 Tactics division, which is General Morris’ area of emphasis”, said Kimbrough. “Our TEN8 Business Training Division and TEN8 Citizen Programs are on hold for now until group activities once again become more feasible and customer demand comes back. We anticipate that to be sometime in 2021.” For more information on those programs, go to www.Ten8Life.com.