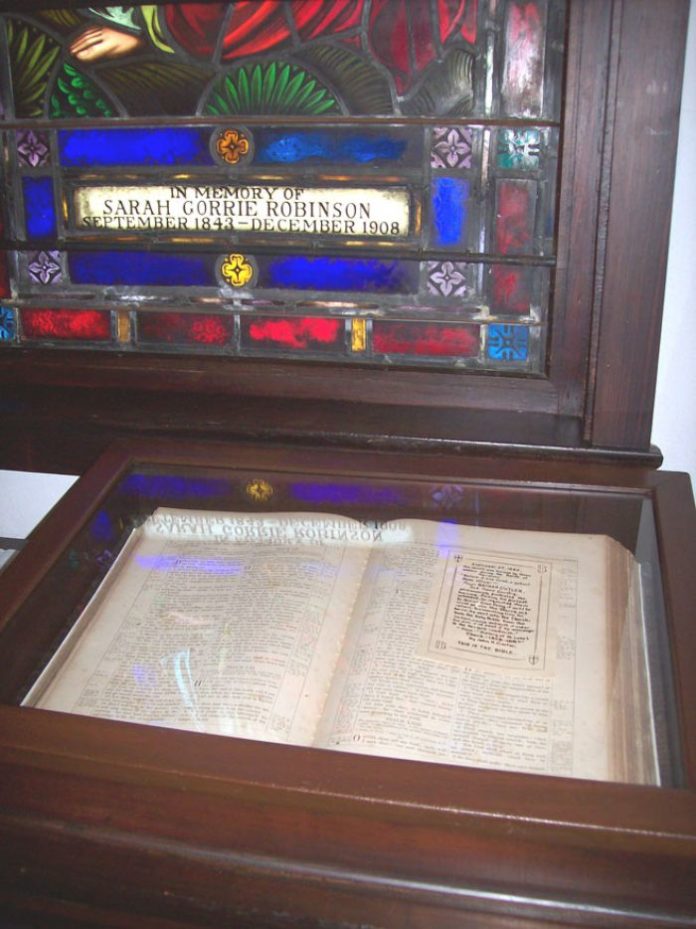 Parishioners of St. Luke’s Episcopal Church Marianna began their anniversary celebration of 175 years in March 2013. The church was organized in 1838 as the result of a visit from The Right Reverend Jackson Kemper, Bishop of Missouri and Indiana. Bishop Kemper had been called as a missionary bishop to the Florida territory.

It was on January 19, 1838 that the Diocese of Florida was formed in Tallahassee by delegates representing the churches in Pensacola, St. Joseph, Apalachicola, Key West, St. Augustine, and Tallahassee. St. John’s Episcopal Church in Jacksonville “was entitled to participate…but for some unknown reason this parish did not send delegates” according to the writings of The Right Reverend Frank A. Juhan, Fourth Bishop of Florida, 1924-1956. Keep in mind that the fifteen laymen and three priests who attended the convention spent days and weeks traveling through a wilderness and miles and miles of forest and swamp to reach St. John’s Episcopal Church in Tallahassee. At the convention it was reported that there were families at Marianna “who have by no means forgotten the church of their fathers” and who would welcome a missionary. Bishop Jackson Kemper came and conferred with church families in Marianna and Campbellton. This resulted in the March 7, 1838 founding of St. Luke’s Marianna, one of the oldest Episcopal churches in the state of Florida.

Dr. Simmons J. Baker, Sr., Dr. Edward C. Bellamy, Dr. Ethelred Philips, and Mr. Benjamin Wynns were the first vestrymen. It has been said the name St. Luke’s was chosen because of the number of practicing physicians serving on this vestry. In the beginning the dozen or so families held services in public halls or private homes. Missionary clergymen visited briefly for several years. The Reverend Mr. Singletary became the first rector in 1845. He was followed by The Reverend Henry McVickar in 1848. In that year Mr. Thomas Bush gave St. Luke’s the land for the present church site and churchyard (cemetery). Dr. McVickar resigned soon after, due to an illness that resulted in his death in 1850. The Rev. James S. Green arrived to take charge on April 8, 1850 and the first building was begun. This lime rock structure had a seating capacity of 150. Reportedly the rock was not well selected or quarried and the building became unsafe. “It was finally razed after seven or eight years’ use.” (John H. Carter, Sr. The History of St. Luke’s Episcopal Church: Our First 150 Years, page 6.) In 1851 The Rev. Green was sent to Wakulla County by the Diocese. The next regular rector of St. Luke’s was The Rev. William N. Hawks who served from 1854 to 1855. St. Luke’s was then without a rector for nearly five years before the arrival of The Rev. William D. Scull in the later part of 1859. It was about this time that the lime rock building was torn down and the pariah held services in the county court house while funds were raised for a new building. The corner stone was laid in 1861 and the handsome Gothic style, frame building was consecrated on May 17, 1863 by The Right Reverend Francis H. Rutledge, First Bishop of Florida. It was larger than the stone edifice it replaced. The nave was 60 by 35 feet and the chancel 18 by 15 feet. The tower for the main entrance was about 80 feet high.

Just over sixteen months after this church was consecrated, it was burned to the ground during the Battle of Marianna. The order was given for the Federal troops to torch the church on September 27, 1864, partly due to the fact that several defenders of the town refused to surrender and continued shooting down from high inside the belfry. As the troops were making ready to fire the church, against the objections of a Union officer, someone rushed inside to save the pulpit Bible. Tradition holds that it was 20-year-old Major Nathan Cutler of the 2nd Maine Cavalry. Legend tells that as Cutler left the church he was blasted from his saddle by the buckshot of Frank Baltzell and another teenager whose identity has been lost to time. However there is documentation of Cutler being injured in the initial charge of the raid, making it improbable that it was he who saved the Bible. The Holy Bible was in fact saved that day. It was delivered to the home of the rector, The Rev. Mr. William T. Saunders, and is displayed in a glassed case in the present church. (Sandra Picture #1 should be near this. Caption: The Holy Bible that was saved from the flames in 1864 is displayed beneath a window that is in memory of Sarah Gorrie Robinson, daughter of Dr. John Gorrie, inventor of artificial ice.)

St. Luke’s parishioners worshiped in the First Presbyterian Church building until a third St. Luke’s building could be completed. Although it was slightly smaller, this building was a copy of the one that was burned in 1864. The Rev. Dr. Willard Birney Hudson was rector during its construction. When it was finished in the spring of 1879, the young Dr. Hudson went up on the roof in the moonlight to erect the gilded cross on top of the east end of the building. He left the next morning to work among sufferers in a yellow fever epidemic in Memphis, Tennessee, never to return to Marianna.

It was January 18, 1889, almost ten years later, before this third church building was consecrated by The Rt. Rev. Edwin G. Weed, Third Bishop of Florida. It could have taken ten years for the consecration, partly because the entire state was one diocese until 1892 and travel was slow. For instance Bishop Weed had to take a train to New York and journey by fruit boat to the keys when he visited the Key West Parish!

After The Rev. Mr. Hudson several of the St. Luke’s rectors were shared with Trinity Episcopal Church in Apalachicola. Imagine the difficulty of the horseback trips required of The Rev. Cornelius Apple and other rectors who served both parishes. The Rev. Mr. Jesse Richard Bicknell, rector of St. Luke’s, 1895-1897, did not need to divide his energy and was able to devote all of his time to St. Luke’s Parish. Father Bicknell was particularly interested in young people. He once took the Sunday School children on a picnic to Natural Bridge Cave when it was lighted only by the candles they carried. According to Elizabeth MacKinnon Anderson in “The History of St. Luke’s Episcopal Church” page 44, one fearful little girl trembled when the routine order was given to blow out the candles. Then when Mr. Bicknell said in jest, “Where are the matches? Oh, I left them on the rock outside the cave,” she is reported to have let out a “Comanche” yell; and there was light!