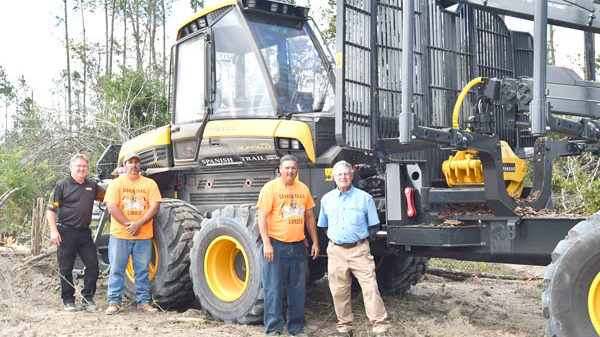 Spanish Trail Lumber Company is based out of Marianna. The company harvests timber and sells it on a global level.
Hurricane Michael left roughly 72 million tons of timber rotting on the ground. Nearly a year later, and one local lumber manufacturer is using new technology to salvage all that they’ve lost. From the time, the damage was assessed following Hurricane Michael, Ross Jones, Spanish Trail Lumber General Manager, has been non stop finding relief for loggers in the panhandle.
“We’re going to Tennessee, we’re going to Virginia, we’re going to Texas and of course Georgia and Alabama and we’re competing with wood that’s manufactured around the world,” said Jackson.
The problem was Hurricane Michael destroyed most of their supply. The U.S. Forest Service designated the damage as catastrophic.
“A lot of people have 40-50 acres and they like to hunt on it, but you can’t even walk through it now,” Jackson said.
Jackson says he knew they had to find a solution. Jackson found a machine, referred to as a Ponsse Scorpion King. This machine was brought to the panhandle and showcased for loggers. With the cost of this piece of equipment, there were no loggers to take the risk of investing in it.
The company decided to take a leap and invest in equipment never used before the storm in the Southeast. “If we didn’t have this equipment, the future would look very bleak because we need ‘X’ amount of raw material to log. The conventional loggers from what we can gather, have lost about half of their production capacity,” Jackson said.
The Ponsse Scorpion King can navigate through all the debris the storm left behind. Jackson says saving the timber industry is not just about the economy, it’s about the future of our state as we know it.
“It’s detrimental to the wildlife, it’s detrimental to recreation, and it’s detrimental to timber and we’ve always viewed it that all three of those things could coexist at the same time,” Jackson said.
A single timber tree can take nearly a decade to grow. Jackson hopes the new equipment gains traction in the Panhandle and thus allowing the industry a speedy recovery.
Jackson says Spanish Trail Lumber is committed to fixing Jackson County’s logging industry.