Trent Childs is 24 years old if you check his birthdate, but he knows at 24 what some wait a lifetime to figure out. He knew he didn’t want a 9-5 office job when he finished high school. He was raised in the Grand Ridge community and had spent countless hours on the Childs’ Farm, oftentimes behind his dad, Allen Childs.
He graduated from Sneads High School in 2014 and one year later, Spanish Trail Farms was formed and it has been thriving since its inception. Trent says, “I knew 9-5 in an office wasn’t for me. Farm life is tough no doubt about it, but it works for me. I grew up in it and I didn’t want what you call regular hours. I wanted to be able to set my own goals and be as big or as small as I wanted to be.”
Childs also knew he had to have dependable people on board to make his business a success so he went with what he knew would work. He immediately reached out to his older sister Bailey Childs Mayo, who had just completed her bachelor’s degree in business and accounting and is working on her MBA from the University of West Florida to handled all his financial issues. He has two younger siblings who are no strangers to work, Nate and Ella Ann who can be seen from sun up to sun down helping with sorting, packaging and whatever needs to be done. The farm wouldn’t be complete without dad and mom, Allan and Keesha Childs ever present ready to work, advise and guide.
This year, they are offering watermelons, tomatoes, squash, zucchini squash, bell peppers, sweet corn as well as field corn (creamed field corn), new potatoes, snap beans, several varieties of peas and butterbeans.
Aside from his family, Childs employees around 40 people throughout the summer growing season. As far as the U-pick, he says he’s not certain if that will be offered this year but will announce it if it comes to fruition. Spanish Trail is open Monday through Friday from 8 a.m. until 5:00 p.m. and from 8:00 a.m. to 2:00 p.m. on Saturday. They are closed on Sunday. 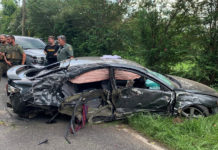