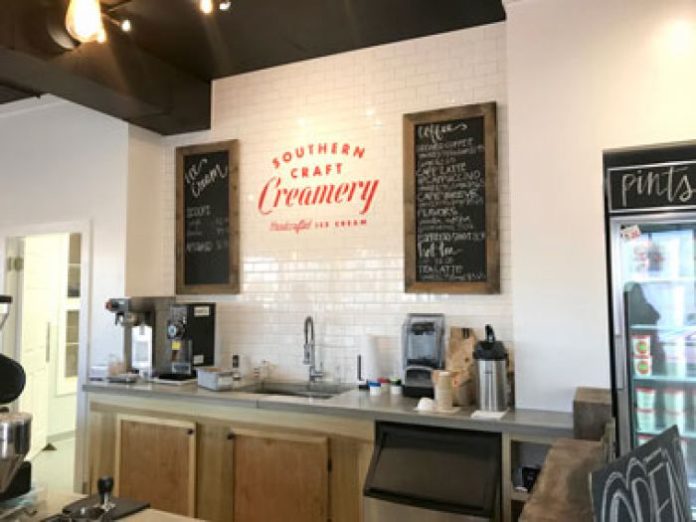 Senator Marco Rubio last week named Jackson County’s Southern Craft Creamery as the Senate Small Business of the Week. Rubio is the Chairman of the United States Senate Committee on Small Business and Entrepreneurship. In making the announcement, Rubio said, “It is my pleasure to nominate Southern Craft Creamery as the Senate Small Business of the Week. Founded in 2012, Southern Craft Creamery was founded by Dale and Cindy Eades with the help of their daughters, and their sons-in-law. The Eade family opened its first physical location in Marianna, Florida last February after operating as a wholesaler for six year. Known for using only premium fresh and local ingredients, Southern Craft Creamery was recognized for their handcrafted buttermilk ice cream in Southern Living Magazine’s “2015 Food Awards,” and in 2013 they were recognized as the Overall Winner in the Food Category by Garden & Gun Magazine’s “Made in the South” awards. In addition to making handcrafted ice cream, Southern Craft Creamery is dedicated to supporting the Marianna community. After Hurricane Michael devastated their community, they gathered supplies for their victims, opened their doors to allow residents to cool off, and offered free coffee and ice cream to first responders. They also began donating their tips to friends of the Florida Caverns State Park to help replant trees and repair damages caused by the hurricane. The entire Eade family and all of the employees at Southern Craft Creamery exemplify what it means for a small business to serve a community and I wish them nothing but success in all of their future endeavors.”

Today, Brad and Meghan Austin are the owners of Cindale Farms and Southern Craft Creamery. Meghan’s parents, Dave and Cindy Eades, started in the dairy farming business in 1994. After several moves to grow the family business, they have settled across the road from Torbett’s Dairy on Old U.S. Rd. Their dairy cattle graze on a different patch of grass every day and are milked seasonally, meaning two months out of the year, they do not harvest milk. They are also bred seasonally with most of the new calves arriving in January. In 2009 they were named the Jackson County Farm Family of the Year. In 2010 they were named Conservationists of the Year and in 2014 they were named Ag Innovator’s of the Year. The Florida Farm Bureau bestowed the CARES award, which is for environmental leadership. They decided several years ago to diversify and try their hand at the ice cream business. After a year of hard work and many failures they sold their first pint of ice cream in 2013 under the name Southern Craft Creamery. That same year Meghan’s sister entered them in Garden and Gun Magazine’s contest which featured over 900 artisans. Not only did they take first place the food category, but they were named the overall winner. One of the unique things about their product is that they only use ingredients that can be obtained locally and those that are in season. Satsumas from Jackson County and caramel made in their own kitchen are just two examples. About the farthest they go for ingredients is Ocala for strawberries or Pensacola for pecans. In 2014 they expanded their production facility, which was then housed in the old M & W warehouse on Franklin St. That same year they were recognized by the Florida Cabinet and later Food and Wine Magazine.  In 2015 and 2016 they were featured in Southern Living Magazine and in 2017 they expanded again, moving into their current facility, which is in the building that previously housed A Wild Hair and Mia’s at the corner of Market St. and Jefferson St. The building is not just a production facility, but an ice cream and coffee shop. Beautifully decorated, it displays large canvas photographs of their “ladies,” the cows from Cindale Farms. Also proudly displayed on the wall is a large canvas of their mission statement. Several windows inside allow patrons a look inside the creamery’s kitchen while production is underway. Their Grand Opening was held Saturday February 24th and was a huge success, causing them to sell out of ice cream. Both Brad and Meghan have degrees from the University of Florida and Meghan is a Doctor of Veterinary Medicine, which surely comes in handy on the farm.

Southern Craft Creamery was honored with the news they had been chosen, “WOW, what an honor this is. Yes, we are dedicated to supporting our community and we are so grateful for what it gives back to us.”  They expressed their thanks to Senator Rubio for naming them Small Business of the Week.