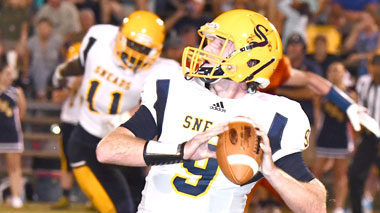 The Sneads Pirates are off to the races this year with two solid regular season wins, the latest coming last Friday night when they handed Liberty County a 44-9 loss on Bulldog turf. The Pirates have outscored their opponents 85-23 in the first two games and started the season coming off an impressive pre-season win.
The Pirates made it look easy as they recorded seven touchdowns and two point after attempts. Coach Bill Thomas said if there was a down side to the game, the kicking was a little off. He was confident it would back on track this week.
On the night, Calvin Stringer kept his residence in tact with three trips to the endzone on 11 carries for 208 yards. Seth Scott had 109 yards on nine carries and a touchdown. Ric Reed took a five-yard run in for a touchdown with Colton Mercer scoring a touchdown on the ground. Dylan Dawson had a punt return for a touchdown and actually had another one but it was called back. Anthony Moran converted on two point after attempts.
Thomas said they will travel to Bonifay this week to take on Holmes County and they are preparing for battle. Kick off is scheduled for 7 p.m.