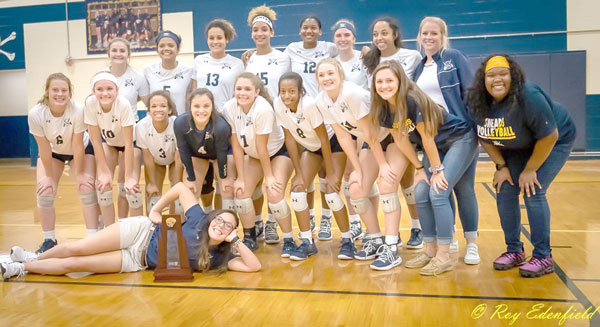 The Sneads Lady Pirates handily defeated Blountstown in three straight sets last week to move on the state semi-finals on November 9. They are scheduled to take on the Baker Gators and have their sights set on a win to advance to the state finals. The contest is scheduled to be held at Baker High School but rest assured, Coach Heather Edge will have momentum on the side of the Lady Pirates.
In last week’s game, it was a 25-11 win in set one, before Sneads won set two 25-17 and finished it off with a 25-16 win in set three to take the match.
Leading Sneads in attacks were Hadley Barfield and Kiara Garrett with nine kills each. Close behind was Michael Edenfield and Aaliyah Baker with six kills each. On board with five kills was Kazia Gainer, followed by Jordyn Riano with two and Taylor-Reese Howell with one kill.
Kazia Gainer led her team with five blocks with Michaela Edenfield and Aaliyah Baker adding two blocks each to their stats. Kiara Garrett added a block.
Lily Glover led the Lady Pirates with 17 digs, followed by Hadley Barfield with eight on the night, followed by Hadley Barfield with eight digs. Taylor-Reese Howell had five digs while Jada Coleman and Kiara Garrett were on board with four digs each. Michaela Edenfield racked up three digs, with Sister Arnold and Kazia Gainer picking up two digs each.
Jordyn Riano recorded 34 assists with Lily Glover picking up four assists.