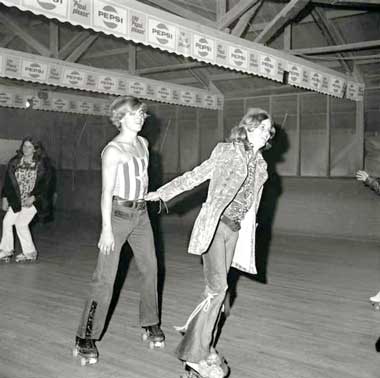 Some people seem to just skate through life, never stressed about anything or appearing to have any problems. That can’t be true, of course, and skating itself is an activity that usually involves numerous falls, bruises and embarrassment.
Growing up in Marianna, there was no chance I’d ever learn to ice skate, but that was fine with me. Dealing with roller skates was challenge enough. We had no sidewalks on Pine Street, which was on the West side of town, but our local skating rink was within walking distance. My classmates were learning to skate far sooner than me, so whenever I had spending money, which wasn’t often, I tried to keep up with them as they showed off their skating skills.
I started out cautiously, sticking close to the rail around the rink. It embarrassed me to be so far behind my friends in mastering that new skill, but I rarely had a chance to practice it. My brother, Wilton, was skating like he’d been shot out of a gun, but he earned money from his paper route, and I had no way to earn money until I got old enough to babysit.
I recall trying to skate in time with the music, but it was awhile before I was fast enough to keep up with it. I remember the music, which I believe was provided by a juke box, because those were popular in those days too. Most of the records on the juke box had a good, strong beat, not too fast or too slow. The music had to be loud but not too loud, because young people came there to socialize, which involves talking. Boys and young men sometimes entertained their dates at the skating rink. Because even a pebble could cause an accident, the floor of the rink was kept slick, smooth and clean.
Lighting had to be perfect too. For safety reasons, it needed to be bright enough to see clearly, but not so bright that it spoiled a romantic mood. I was too young to date, so was glad when metal skates gave way to rollers that were made of polyurethane. This was a great thing for me, because I could now skate on sidewalks and that cost me nothing. Soon, I could keep up with my brother if we skated to school. We had to lug our skates part of the way, though, as sidewalks never made their way to Pine Street.
The invention of these newer wheels was not a good thing for the owners of skating rinks, however. Keeping skating rinks up to par was costly, and suffering a sharp decline in customers, they gradually went out of business. Ice rinks fared far better, especially in cities where hockey teams were formed. Ice rinks also gave young people an opportunity to learn figure skating and to compete in national and international competitions. Skating became both an art form and a sport.
The idea of putting wheels on shoes is credited to an Englishman, Joseph Merlin, who wanted to make a grand entrance at a masquerade party, held sometime in 1760. His plan was to roll into the ballroom while playing a violin. He got more than enough attention as he had trouble doing two different things at the same time. His speed got out of control and he crashed into a large, mirrored wall which didn’t bode well for the wall or for Mr. Merlin. I suppose that may explain the origin of the term “crashing” a party.
His idea caught on rapidly, though. In 1918, a Berlin ballet company presented a ballet performance with all its dancers on roller skates. In 1840, bar maids on roller skates served the thirsty patrons of a German beer Garden.
Improvements to skates continued and in 1863, an American, John Plimpton, invented roller skates that allowed the skater to make turns and skate backwards.
In 1902, the Chicago Coliseum opened a skating rink that was attended by over 7000 guests. In 1979, two brothers, Scott and Brendon Olson redesigned skates, using polyurethane wheels and adding a toe-brake.
Today, roller blading is a popular competitive sport with daring participants skating up and down walls and taking dangerous jumps. Getting somewhere faster has always been popular and now, electric scooters are attracting many buyers because they have many advantages, not requiring expensive fuel and adding no contamination to our air. They are also quiet, which is not always a good thing because pedestrians often don’t hear them coming, and there is the dilemma of where to park them even though they take up little space.
As a song made popular by Doris Day says, “The future is not ours to see.” But no doubt, people will continue to want to get wherever they are going, as fast as possible.