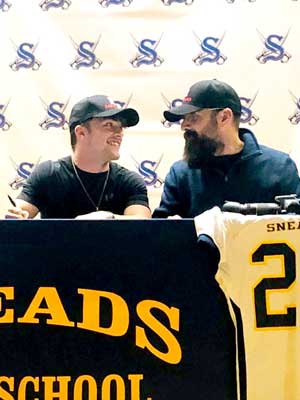 Seth Scott was all smiles last Friday when friends, faculty, teammates, coaches and families gathered to witness him signing to continue his education and baseball playing days. After many offers and visits, Scott made it official that he will be a Ripon Redhawk next season. Scott had offers and looks from an array of colleges including Culver Stockton University, McPherson College, Defiance College, Maryville College, Carson Newman, Ohio University, and Morehead University. Offers ranged from D3, D2, D1 and NAIA but in the end, Ripon won out with Scott signing on the dotted line.
Scott’s honors throughout high school were not just on the field. He is definitely a two-fold athlete, excelling in the classroom as well as on the field, the diamond and in the weight room. Through competing in three sports and being successful at all three, Scott has maintained a 3.5 GPA.
His stats in football leave no doubt he would be going places following high school. He was named 2019 FHSAA 1st team All-State Defensive Athlete, 2018 FHSAA 2nd team All-State Defensive Athlete, All County, All Conference, Player of the Week for Max Preps/USA Football Defensive Player of the Week. 2016 Offensive Player of the Year (Greenland High School).
His senior stats were impeccable with 620 rushing yards, 198 receiving yards and 190 return yards for 1008 all-purpose yards. Defensively, he had 126 tackles, 69 solo and 57 assists, 13 TFL, 2.5 sacks, one interception, nine passes broken up, seven hurried passes and one fumble recovery.
Throughout his high school ‘career’, Scott had 1861 rushing yards, 747 receiving yards and 413 return yards and 220 interception return yards for a total of 3,241 all-purpose yards. He recorded 315 tackles, with 190 of those solo, 125 assists, 39 TFL, 14 sacks and six interceptions including two pick six.
Scott’s coach Bill Thomas has nothing but praise for him, “Seth is a hard-nosed player with good grades. I love the way he handled his recruitment. He didn’t rush it. He visited every school and, in the end, chose a school that fit him academically and athletically. I believe he will do big things in his time there.”
Scott has played football, in his words, “Since I was little, like six years old.” He has played running back, linebacker, defensive back, full back, a little bit of quarterback at middle school. At high school, he played primarily running back and defensive back.
Scott is the son of Mike and Anji Scott and has an older sister, an older brother and a younger brother and a step sister. He is the grandson of Gary and Kathy Scott. Although his older siblings did not play sports, his younger brother plays football and baseball. Scott is very humble about where he is today, “I want to thank God first for where I am today. I want to thank my grandparents for getting me where I am and my dad and mom, my coaches and my team.”