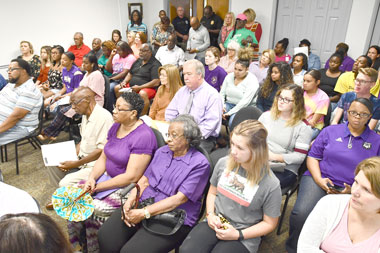 Tuesday afternoon, the Jackson County School Board met in their regular monthly meeting before a packed house with many attending having to view from the hallway due to an overflow of people. The item drawing interest was the recommendation from Superintendent Larry Moore that the board approve the suspension of Sybil Rivers, assistant principal at Marianna High School, effective October 16, 2019, with recommendation for Termination pending a hearing.
In a 4-1 vote by the Jackson County School Board, Rivers has been suspended without pay following allegations of abuse by a student. This decision was made at Tuesday’s Jackson County School Board meeting where the controversy took center stage before a room full of residents. District 1 school board member Diane Long was the lone vote against the recommendation.
Sybil Rivers was accused of abuse by a student on September 19, and has been on administrative leave with pay since September 20. The Board, and those present, heard from Rivers who read a statement, two students, MHS teacher Jerri Benton and community leader Elmore Bryant – all who spoke in favor of Rivers’ contributions at MHS well beyond the scope of her duties at Marianna High School. Last Thursday at the workshop, MHS teachers Carolyn Hodge and Susie Barber spoke of Rivers’ accomplishments, love and compassion for the students, along with two students from MHS.
Rivers spoke in her behalf, defending the allegations brought against her, “I did not commit the allegations of abuse or battery on the student whose accusations are at the forefront of this issue.” She talked of her love of the children at MHS and throughout Jackson County, the hugs she received when she encountered children outside the confines of MHS and the names of endearment (mom, auntie, etcetera) that were bestowed upon her.
Lastly, they heard from the victim’s mother, who said, “My daughter called me cowering in a closet on the phone to come get her, I was at work,” said Crissy Nelson. “For not looking at her in the face, she grabbed her by the hair on her head…,” but at that time Nelson was stopped by the Board from going any further into the details of the allegations. Nelson showed a picture of her family to board members and said emphatically this was not a race issue and gave credit to Rivers for assistance with her children following the death of her husband a little over two years ago.
In an interview with Superintendent Moore following Tuesday’s meeting, he said, “The assistant principal at Marianna High School was suspended without pay based on my recommendation this evening,” The Superintendent also made an additional request, “In addition to my recommendation tonight, I have recommended that she be terminated and she has the right to request a hearing.”
Ms. Rivers has requested a hearing following the allegations. It is not known at this time when that will be.