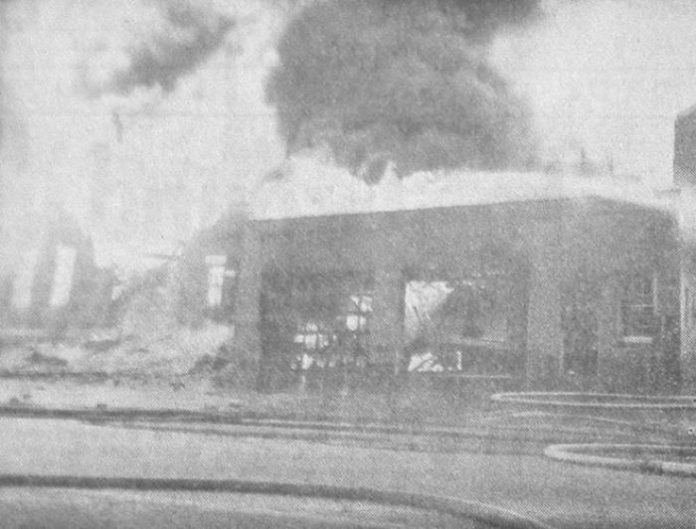 It was 1:30 on March 26, 1968, a typical Marianna spring afternoon when there was a most unexpected event in downtown Marianna.

While working on a bus in the bus barn area of the Jackson County Board of Public Instruction Building on Clinton Street, as the bus mechanics were using a cutting torch on a car spring, suddenly the bus’s gas tank exploded! Since several windows and a door were open leading to the main building, the fire spread quickly.

The 1906 building had been used for grammar and high school classes until 1927 when the Marianna High School on Daniel Street was completed. At that time the School Board made the building their home. It had been used very effectively as the Marianna High School, grades one through twelve, for about forty years, and prior to that, a wooden structure served grades one through twelve from about 1880 for the next twenty five years, when the building was torn down for the new, very large brick two-story school building.

The word was, that at one point that afternoon, the Marianna Fire Department, located just across the street, felt they had the fire under control, but it is said to have reignited and when it did, the bell tower acted as a chimney and the building was soon burning totally out of control.

Very few records were rescued as the building began to burn. A few files and records were thrown from the windows on both the first and second floors by the employees before they had to evacuate the building. Some of those files were in Superintendent John Dekle Milton’s office, which included a couple of books of School Board minutes, some teacher records and personal items of Superintendent Milton.

Among the records which were reported totally destroyed included all student grading and attendance records, all transportation records, School Board bonding and funding records throughout the years, employee records, federal program records, all lunchroom records, including records concerning federal feeding programs, student attendance records, all records concerning school board properties and school plants, the adult education records and all School Board meeting minutes except those which were in the Superintendent’s office. It was reported that none of the records were backed up by any retrieval system, and all were lost forever, no matter how important they were.

Over the years there have been numerous times when individuals have needed certain school records for employment, government service, job placement, and varieties of other reasons, only to be told “those records all burned in the fire on March 26th, 1968.”

Fortunately, the fire department was able to quickly extinguish the fire which spread to the roof of a nearby house, causing very little damage. While the building was a total loss, the Marianna Fire Department was highly commended for containing the huge fire to the area of the School Board Building and no damage was incurred to any other buildings in the area, and there was no loss of life.

Roy Beall’s two-story native stone building on the corner of Madison and Lafayette Streets was rented as the main School Board Office. Other nearby buildings was also rented for auxiliary buildings for storage.

The building was used for the next thirteen years until the new building was constructed at the site of the original brick building and the preceding wooden building built in late 1880. The large one-story stucco building we see today on the corner of Jefferson and Clinton Streets was built in 1981.

Strangely, after the School Board vacated the lime rock structure on the Lafayette Street corner of the present Madison Street Park, that building also burned one extremely cold January night when it is believed a vagrant was trying to keep warm with a bucket of coals in an open stairway leading to the second floor. It appeared that the hot coals set the stairway and the building on fire. The temperature was said to be so low that the firemen could not fight the blaze because the water was freezing as it left the fire hose. Many locals recall that night as one of the coldest nights in Marianna history.

The 1981 building has served very well for the past thirty plus years, but plans have been underway for several years to find a way to renovate the 1927 Marianna High School and make it a very useable office building with space to house the Jackson County Board of Public Education offices for many years to come. The beautiful old building would certainly provide space and character for such a use.

Recently, a $6,000,000 grant request for funds for the renovation was placed in the State budget which was submitted to Governor Scott for his signature a few weeks ago. Unfortunately, the Governor did not give the request his blessing, and by refusing to sign that portion of next year’s budget, it appears that the plans to restore and use the Marianna High School building will have to be put on hold for the time being.

The photos and some portions of the story with this article are taken from the March 27, 1968 issue of the Jackson County Floridan, which was loaned to the writer by Daun Crews who had saved the issue for the past 45 years. Thank you for sharing with us, Daun.