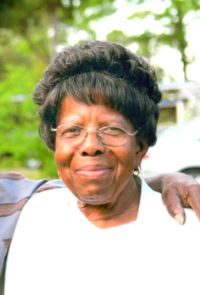 She was a 1954 graduate of Blanche Ely High School.  She worked at Weston House in Pompano Beach, Florida.  She later became a professional upholstress and seamstress.  In 1970, she became a partner at Dorothy’s Upholstry.  In 2005, she moved to Marianna, Florida and united with St. Luke Missionary Baptist Church where she was very active.

Her memories will be forever treasured by three children, Carlotta Brown of Greenwood, Florida, Dr. Charles Williams and wife Marla of Nashville, Tennessee and earl Williams, Jr. and wife Libby of Missouri; two sisters, Dorothy Fields of Pompano Beach, Florida and Christeen Carson of Detroit, Michigan; one sister-in-law, Joyce Gayle and husband Joseph of Ft. Lauderdale, Florida; 14 grandchildren and eight great grandchildren; and a host of nieces, nephews, cousins, other relatives and friends.

A homegoing celebration will be held Saturday, April 27th at 11a.m. at St. Luke Missionary Baptist Church, with Pastor Riley Henderson officiating.  Interment will follow in the Orange Hill Cemetery with arrangements entrusted to the Caring Staff at Peoples Funeral Home of Marianna.