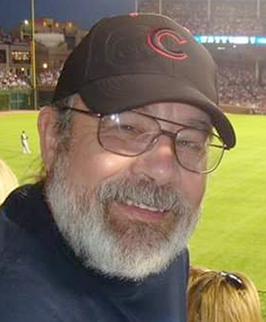 He was born on June 6, 1953 in Madisonville, Kentucky and grew up in Earlington, Kentucky. He raised his family in Paris, Illinois until last year when he and Cathy moved to Marianna, Florida after his retirement to be closer to his daughter and family.

Rodger and Cathy, high school sweethearts, had a love most could only dream of. You could see the love he had for her just by the look in his eyes. They spent many vacations together traveling, including many special trips to Mackinac Island. Rodger loved being a father, grandfather and great-grandfather. He was also an avid Chicago Cubs and Bears fan.

Rodger spent 17 years working as a coal miner. He loved sharing stories from his experiences and possessed a love for unique stones and crystals that he found. Rodger moved on to develop a career at Sony and after 25 years of building relationships, as strong as family, with many of his coworkers, he retired. Rodger’s family would like to thank the multitude of individuals from Sony who had become such an integral part of Rodger’s life and who brought him so much joy.

Rodger is survived by the love of his life, Cathleen Plunkett; daughter, Annie and husband, Richard Rinehart, and their children, Kole Rinehart and Jacob Lynch.

Rodger was the type of man you wanted to meet at least once in your life. His love and support were unlike most others. His ability to hold his family together during the hardest times showed his strength and unconditional devotion. His grandchildren remember him always having a pocket of “golden dollars” and slipping each of them one anytime he got the chance.

The Plunkett family will be celebrating his life privately; however, if you would like to send flowers or keepsakes, please reach out to the family for directions on how to do so. Rodger’s family also expresses sincere gratitude to Emerald Coast Hospice and Kindred Home Healthcare staff for their dedication to taking care of Rodger and his family so passionately.