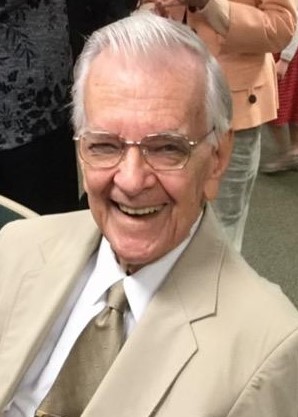 Richard Norman Wintz, Sr., age 97, died January 11, 2022 at Bonifay Nursing and Rehab. He was born June 4, 1924 to Frederick Carl Wintz, Sr. and Mary Etta Morgan in Charleston, WV. He was preceded in death by his devoted wife, Beulah (May 2002) and older brother, Frederick Carl Wintz, Jr. (January 2010), a half-sister, Mildred Hall, and a stepson Joseph Blomer of Sunrise, FL.

When he finished high school, he enlisted in the military and served in the army during WWII. After returning to the United States, he worked as a typesetter for the Washington Post, the New York Times, and retired from the Columbus Dispatch. He loved the beach, fishing, dabbled in wood carving, and was an avid reader.
In 1956 he was baptized as one of Jehovah’s Witnesses in Louisville, Ky. In 1957 he was appointed as a Full-time pioneer and elder in the congregation. In 1958 he married his dear friend and fellow pioneer, Beulah Manning. They loved sharing joys of the Christian ministry and served tirelessly in several congregations in 4 different states.

In 1965 he was appointed as News Service Representative and writer for the Watchtower Bible Society serving alongside newsman in several states. He also served on the first Hospital Liaison Committees organized in Washington DC and New York City, helping them to inform the medical world of Jehovah’s Witnesses Biblical stand on the sacredness of blood. He also served in the original organizing of Regional Kingdom Hall Building committees beginning in Michigan and Ohio. In 1989 he and his wife, Beulah, came to Bonifay, FL where he served as congregation secretary for many years and an elder until death.

The family would like to give a special thank you to all the friends, home health nurses, hospice workers, and later the nursing home staff who cared for him. All the many phone calls, visits, treats, flowers, and cards were very much appreciated too.

Williams Funeral Home is in charge of arrangements.

Expressions of sympathy may be submitted online at www.williamsfuneralhomeservice.com.