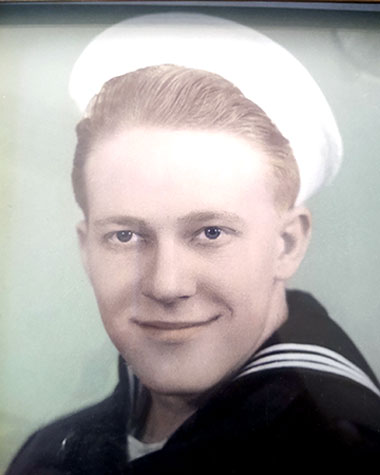 On Wednesday, March 3, 2021, Paul Daniel Carter passed away after a short illness at the age of 85. Paul was born on February 24, 1936 in Cottondale, Florida to the late Jonnie and Ruby Carter. He served in the United States Navy during the Korean Conflict on the USS W.A. Mann. Paul was able to see many foreign places during his time served in the Navy, he signed himself up in the Navy to avoid being drafted into a different branch of the military. Paul said, “I was guaranteed three hot meals on board a ship, rather than rations in the woods”, and that was all he could hope for in such an uncertain time. He was known for his quick wit and had a great personality. Paul spent most of his life in Chattahoochee, living in the same house for over sixty years. He retired from FSH in 1987, where he worked in the agriculture department, the painting crew, and the maintenance department during his thirty-year tenure there. Paul loved attending church; he was a long-time member of Harvest Chapel Assembly of God in Chattahoochee.
Paul is survived by his wife of almost thirty-six years, Betty J. Carter of Chattahoochee; stepsons and daughters-in-laws, Keith and Heather Shaw and Mike and Debbie Shaw, all of Chattahoochee; daughter Pam Mandeville of Mary Esther; one brother, Kenneth “Carlton” Carter of Jasper, Georgia and one granddaughter, Candace Tye of Panama City.
Mr. Paul was preceded in death by his parents; one daughter, Diane Carter McCall; three brothers, Herman, Tommy, and Jerry Carter.
Funeral Services for Mr. Paul will be held at 12:00 p.m. EST in the McAlpin Funeral Home with Pastor Charles Stephens officiating. Burial will follow in the Mt. Pleasant Cemetery in Chattahoochee. The family will receive friends from 11:00 a.m. EST until time of service.
Jared “Tater” Whitehead with McAlpin Funeral Home is assisting the family with the arrangements.
Condolences may be submitted at www.mcalpinfuneralhome.com.