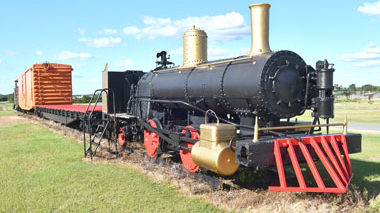 Optimist Park is home to literally hundreds of kids for baseball, softball, football and soccer. They come in groves to play their favorite sport and entertain their parents, grandparents, aunts, uncles and fans. The smiles and laughter can be seen and heard walking into the park. Hurricane Michael took its toll on the park and the staff there worked hard to make repairs in time for the baseball and softball seasons. Through long hours, they were able to accomplish this feat.
Marianna Optimist Club was right behind them in repairs to the Park. They are proud of the Park they built and work hard to continue to contribute. They have worked hard to maintain the trains that have become home to them for many years with kids not quite ready for the fields to play enjoying many hours of play time in and around the box cars. Many days, children both with and without parents have been seen reading the series of “Box Car” books while sitting in one overlooking Optimist Park.
One box car was overturned during Hurricane Michael. Repair to it and uprighting it was more than your everyday job but proved to be a challenge. Long time Marianna Optimist, Jack Hollis gave a little history of the train at Optimist Park, “Now the train was given to us, so it belongs to us too. We’ve spent 10 months trying to find somebody that would even give it a look. We even got to the point to where we were willing to give it away if somebody would just come and take it. I talked to probably 10 scrap iron companies and stuff like that and nobody would touch it because metal is so cheap right now. I was talking to Enfinger up in Dothan and I asked them what they thought we should do. I pleaded with them telling them that they needed to help me with this. They’re in this business and I’m not. He told me to call Steve Holland at Holland Manufacturing up there in Taylor. I called and talked to him personally, sent him pictures of it and measurements. That thing is 60 feet long and the box car weighs 42,000 or 43,000 pounds and that’s just the boxcar. The two tracks underneath it weigh about 10,000 pounds apiece. When I sent him all that stuff, he sent me back an estimate and said he’d do it for the Optimist Club, for $4,180. That was almost $4,000 less than the best bid we got and so we took it. We had some savings and we used that to stand it back up.”
Hollis said, “The caboose, Steve Stewart had been in touch with them with doing corrections and they’re going to come and finish the caboose as soon as possible. So, that’s where we are and as you can see, we are nearing the end for completion of the train project.”
Another task taken on by Mariana Optimist was the sign placed at the outside of the park. Hurricane Michael sent it to parts unknown. Jack Hollis said, “That sign was ours as you know. The storm just blew the whole middle out of it. So, what I did, I had a sign made that was Optimist Park. Because Marianna Recreation has done so much out there too, I went ahead and put a M.E.R.E. (Marianna Educational Recreational Expo) sign on top of it.”
Another project on tap for the Marianna Optimist is the replacing of the donor signs that were lost in the hurricane.
The TIMES and Marianna Optimist invite everyone out to enjoy the additions and repairs, along with some awesome sports at Optimist Park.