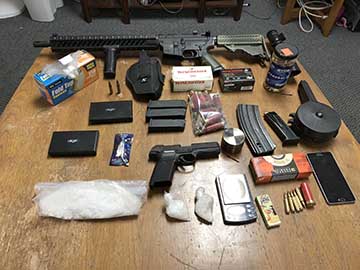 On September 30th, 2020 at approximately 10:15am, the Marianna Police Department received a call in reference to a shooting in the area of Rockwell Street. Upon officer’s arrival it was discovered that the shots were being fired from an address located in the 4200 block of Oak Street. While canvassing the area, shell casings were located in the yard of that residence. Based on the information obtained on scene, officers were able to identify the shooter as Charles Jennings.

The investigation revealed that Jennings shot at the victim numerous times using an AR-15 style firearm. The shots struck an apartment located on Rockwell Street. Information was received that Jennings had the firearm inside the residence. A search warrant for the residence was obtained for the purpose of locating the firearm. Upon entering the residence, Investigators located several firearms and narcotics in plain view. Based on the items observed in plain view, an additional search warrant for the residence was obtained.

During the execution of that search warrant, Investigators located an additional handgun, live ammunition, and other firearm related accessories including high capacity magazines. Also during the search, investigators located approximately one half of pound of methamphetamine and paraphernalia associated with the sale and distribution of illegal narcotics.

Charles Jennings arrived at the residence during this time and was subsequently placed under arrest without incident. Jennings was transported to the Jackson County Correctional Facility where he is being held on $125,000 bond.

Jennings is being charged with the following charges;

This case remains under investigation and more suspects and charges may be forthcoming. Chief Hayes Baggett would like to thank everyone in the community that saw something and said something.