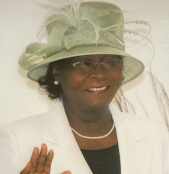 Victoria Russ-Gibson was born Marianna, FL on October 15, 1939 to the late Johnnie Andrews and Anner Baker. She was the oldest of nine children.

She professed her hopes in Christ at an early age.

She relocated to Nashville, TN (Davidson County) and became a faithful and active member at Mt. Gilead Missionary Baptist Church under the pastorate of the late Reverend F.M. Corder and Reverend Foster G. Young. She was a member of the usher board and was dedicated to the cause of Christ.

She was an outstanding woman of faith and a loving mother and friend. A woman of strength, who knew God, was always on her side.

She never took for granted what the Lord had provided or done in her life. She was always thankful and would often say, “Thank you for all you do”. After her retirement from SkyChef/American Airlines she relocated back to Marianna, FL where she began and became a faithful member under the pastorate of Reverend Richard Peterson. You definitely could count on Sister Victoria in service to say “Preach Pastor”.