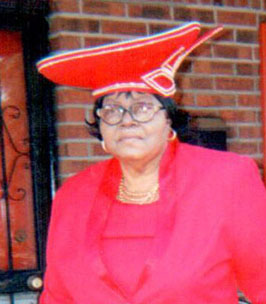 On Monday, July 5th, at Emerald Coast Hospice Facility, Mrs. Hilda Mae Burns, of Panama City, Florida entered peacefully into the arms of her Lord and Savior. The Lord whispered to Mother Hilda Burns, you are weary, come go with me and rest. At the blessed age of 87, she took his hand and followed.

Mother Burns received the gift of life on March 22, 1934 in Ebro, Florida to the late George Brown and Susie(Douglas) Brown.

She was united in marriage to the late Willie George Middleton, Sr. This union was blessed with five children. She later met and joined in marriage to Jerry ‘Josh’ Burns, and they have shared and created fund memories for forty-one years.

A homegoing celebration will be held Saturday, July 17th at 11a.m. at New Beginnings Assembly of the Saints with Bishop Lonnie Mitchell, Sr., Elder Bradford Johnson, Elder Carlos Thomas and Minister Leroy A. Dorsett officiating. Interment will follow in the Hillside Cemetery with arrangements entrusted to the Caring Staff at Battle Mortuary of Panama City.