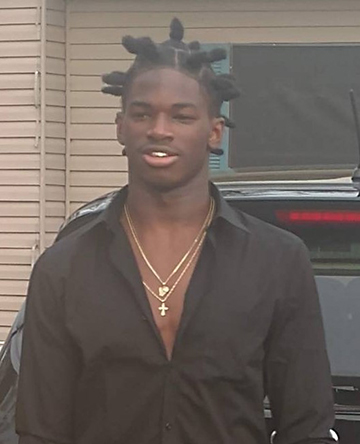 Mr. Ocasio J. Murff age 17, of Malone, FL  passed away Sunday July 5th from injuries sustained due to an automobile accident. Funeral service were held 1 p.m. Saturday July 11th at Malone High School Gymnasium 5361 9th Street Malone, FL. With Reverends Mark Dudley, AL Wilburn and Steven Welch officiating interment followed in the Mt. Zion Cemetery  located 5382 Old US Road Malone, FL with McKinnie Funeral Home of Campbellton, FL directing. Ocasio was born April 15, 2003 in Jackson Hospital Marianna, FL. He was the sixth out of seven children. He was the one who kept a smile on his face at all times. He was a very outgoing and determined young man. Ocasio may have not considered himself as a leader but, he was to so many.  Anything, you thought you wanted to do, he did it; that was Ocasio.   He impacted so many lives with his positivity and angelic spirit, for that, I will be forever grateful. Ocasio always had an energetic soul and he didn’t meet any strangers.  To meet him was to love him.  Cass made a great impact on his fellow classmates and others.  His father was his mentor and taught him and his siblings the importance of having good work ethics. Ocasio didn’t mind working for what he wanted.  Ocasio worked two jobs and when he wasn’t working, you best believe he was enjoying his life.  He cherished his four nieces and two nephews and loved spending time with his siblings. Ocasio smile was the most infectious smile, you would ever encounter, and that smile lit the whole room and melted your heart.  He was always the life of the party.

Ocasio would have been a senior this year at Malone High School where he was the captain of his basketball team and most of all their leader.  When he was younger he played baseball but playing basketball with his two older brothers Chris and Odarius lead him down the road to being the super star he was.

Ocasio had achieved a certification in Ag and had passed all required assessments to graduate high school.  Not only was he a great athlete he was a very bright, smart and intelligent student who was capable of achieving his dreams.

Ocasio gave his life to Christ at the age of eight. He was a member of Mt. Zion Missionary Baptist Church where he served as an usher. There wasn’t anything he wouldn’t do for anyone.   If he was asked, he did it with pride and a big smile.