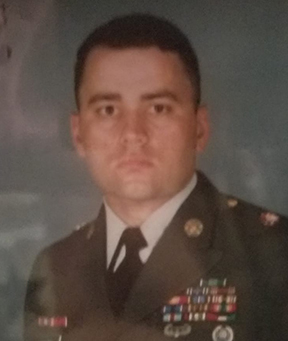 He was born December 15, 1966 in Fort Stewart, GA, Maury attended Graceville High School in Graceville FL, where he played football and baseball. He later attended Wallace Community College and Auburn University at Montgomery.

Maury joined the US Army in 1989 where he was first in his class and an honor graduate at boot camp. He later attended Officer Candidate School and was an honor graduate. Maury travelled the world in the Army with postings in Fort Bliss, El Paso TX, Fort Drum in New York, Peterson Space Force Base in Colorado Springs, CO, and overseas in Germany, Israel, Turkey and Korea. He served in Operation Desert Storm in Kuwait and Operation Uphold Democracy in Haiti in the 1990s.

After retiring from the Army as a Chief Warrant Officer, Maury was employed as a Joint Interface Control Officer by Scientific Research Corporation in San Antonio TX. He specialized in defense and intelligence technology.

When he wasn’t working, Maury enjoyed playing chess, hunting, fishing, and listening to Lynyrd Skynyrd while driving his convertible Corvette. He enjoyed watching all sports, especially the Florida Gators.

Maury will be remembered for his quick wit, entertaining personality and ability to ease tensions in difficult situations with his sense of humor.

Maury was preceded in death by his father, Marion Lee “Moe” Hayes, and is survived by his mother, Jane Campbell Hayes of Dublin GA; sons Tyler Hayes and Ryan Hayes of Grand Rapids MI, and daughter Sandra Jane Hayes of Tampa FL; a sister, Shannon Sinclair of Edinburgh Scotland; and a brother, Matthew Adcock of Dublin, GA.

Maury’s family would like to invite all his friends to join them at a graveside service for Maury, 11 a.m. (CST), January 25, 2023, at Marvin Chapel Cemetery in Graceville, Florida with James & Lipford Funeral Home in Graceville directing.

Expressions of sympathy can be made to the United Service Organization that assists service members and their families at www.uso.org